Michelle Obama Make A Pitch For Clinton In Speech At DNC 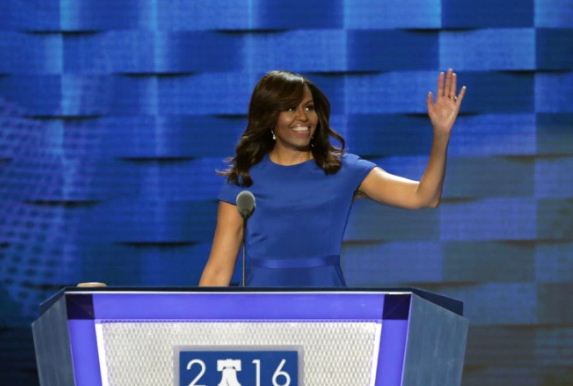 First Lady Michelle Obama gave an inspiring speech at the first day of the Democratic National Convention, endorsing Hillary Clinton has the Democrat Presidential candidate for the November election.

The Democratic Party’s deep divisions were on full display on a raucous first day of its convention on Monday, with Bernie Sanders portraying Hillary Clinton as a fellow soldier in his fight for economic equality while his supporters booed the mere mention of her name.

But by the end of the night, Sanders, liberal favorite U.S. Senator Elizabeth Warren and first lady Michelle Obama offered stirring endorsements of Clinton as the party tried to push through the discord and find common ground.

“Hillary Clinton will make an outstanding president and I am proud to stand with her here tonight,” Sanders said as his supporters and Clinton’s offered competing chants.

The angry uproar in Philadelphia was a setback to Democrats’ hopes their convention would be a smoothly run show of party unity in contrast to the volatile campaign of Republican nominee Donald Trump.

It was also a bitter reminder of the bruising months-long primary battle between Sanders, 74, a U.S. senator from Vermont, and Clinton, 68, a former secretary of state, who this week will become the first woman nominated for president by a major U.S. political party.

Michelle Obama linked the historic nature of Clinton’s campaign with her husband’s own role as the first black U.S. president.

“And make no mistake about it, this November, when we go to the polls, that is what we’re deciding -– not Democrat or Republican, not left or right.

“No, this election, and every election, is about who will have the power to shape our children for the next four or eight years of their lives.

“I wake up every morning in a house that was built by slaves, and I watch my daughters, two beautiful and intelligent black young women, playing with their dogs on the White House lawn,” Obama said.

“And because of Hillary Clinton, my daughters and all our sons and daughters now take for granted that a woman can be president of the United States.”

The tumult began before the convention opened, as Sanders drew jeers from his own supporters when he urged his delegates to back the White House bid of his former rival, Clinton, and focus on defeating Trump in the Nov. 8 presidential election.

“We want Bernie!” they shouted in anger at both Clinton’s victory in the race for the Democratic nomination and emails leaked on Friday suggesting the party leadership had tried to sabotage Sanders’ insurgent campaign.

“Brothers and sisters, this is the real world that we live in,” he said, adding: “Trump is a bully and a demagogue.”

Members of the crowd screamed back: “So is Hillary.” “She stole the election!” someone else shouted.

In the convention’s first hours, party officials struggled to carry out business as angry Sanders supporters roared their disapproval, drawing a deafening response from Clinton delegates.