Who Is Akeredolu, The Winner of Ondo APC Primaries 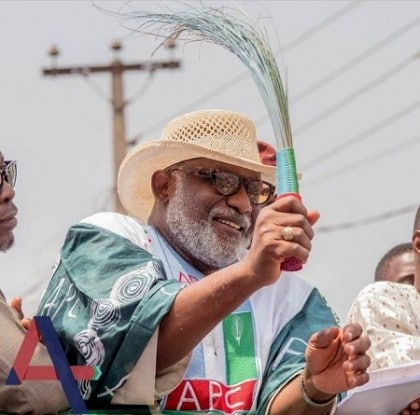 NAN, Abuja: Akeredolu who was APC’s flag bearer in 2012 governorship election, won the party’s primary election for the gubernatorial race with 669 votes to defeat his closest opponent,Chief Olusegun Abraham, who scored 635 votes.

The former NBA president, Chief Rotimi Akeredolu, a lawyer and senior advocate of Nigeria, has emerged as candidate of the All Progressives Congress (APC) for the 26 November, 2016 gubernatorial election coming up in Ondo State.

His other rivals who came third and forth respectively, Chief Olusola Oke scored 576 votes and Senator Ajayi Boroffice scored 471 votes.

Alhaji Mahammed Badaru Abubakar, Jigawa State Governor, who was chairman Electoral Committee for the primary announced the result of the exercise and declared Akeredolu as winner and candidate of the party.

“24 aspirants earlier contested for the election while M. Paul Akintelure officially withdrew his candidacy before the commencement of the election.” said Badaru.

Akeredolu In his acceptance speech, appreciated the electoral committee and the delegates for the free, fair and credible primary election that saw his emergence as the party’s candidate for the Nov.26 governorship election.

The winner, Akeredolu said, “Today our great party has produced a candidate for governorship election in Ondo State.”

“We are looking forward for all of the aspirants to work together as a family to win the next election in Ondo State.”

He became president of the Nigerian Bar Association (NBA) 20 years after call to bar.

Akeredolu, also a former Attorney General of the state, was born on 21 July 1956 in Owo.

He started his primary education at Government School, Owo. He thereafter went to Aquinas College, Akure and Loyola College, Ibadan for his secondary education and Comprehensive High School, Ayetoro, for his Higher School Certificate.

He went on to the University of Ife (now Obafemi Awolowo University) to study Law, graduating in 1977. He was called to the Nigerian Bar in 1978.

Abraham who came second to Akeredolu in the keenly contested primary while speaking with journalists in his house at Ijapo, Akure appreciates and commends his supporters for their efforts and sacrifice during the campaign for the election.

He also paise the APC leadership and members for their activities in ensuring that the exercise was hitch-free, fair and credible.

“I will not turn my back against the party.” Abraham promised to continue to be loyal to the party.