What Senate Plans To Do On Economic Recession – Saraki 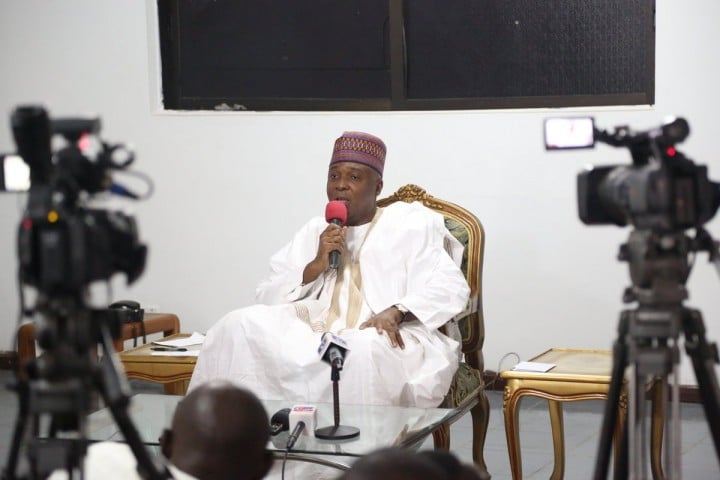 Senate President, Dr. Abubakar Bukola Saraki, said that the time for identifying the cause of the economic recession and those responsible was over and that all political leaders should start working together to find a solution.

This was stated in a press release issued by the  Special Adviser (Media and publicity) to the Senate President, Yusuph Olaniyonu on Tuesday.

According to Olaniyonu, Saraki said this in an interactive press briefing with media correspondents in Kwara State, after observing the Eid-el-Kabir prayers in Ilorin on Monday.

He also said that Saraki said the Senate, on resumption will respond to the economic crisis with a number of measures which include getting managers of the economy to give account to the people, making tough recommendations to the President on needed changes, formulating necessary legislative framework for economic recovery and wide consultations across the private sector.

Olaniyonu said that the Senate President reiterated his call for a broader and bolder economic plan with input from both legislative and executive arms of government, the private sector, professional groups.

All the groups, he said, must work together to put in place interventions that will create more jobs, strengthen the Naira, bring more investment into the country, and diversify the economy.

Saraki, who served as a Special Assistant to the President on Budget Matters during the Obasanjo administration and Chairman of Governors Forum said the economy will be the focus of the Senate when it resumes plenary and throughout its remaining session.

“We are going to have an exhaustive and comprehensive debate on fixing the country’s economy when we resume next week. We understand the pains that Nigerians are feeling and we do not take this for granted.

“Additionally, the Senate intends to invite everybody involved in the management of the economy to address the Nigerian people through the parliament on the steps that are being taken to get us out of this mess. We fully intend to hold all those involved in the economic management of the country accountable – However, we will do so in a manner that is transparent and there will be no cover-up. We will make tough recommendations as necessary”, Olaniyonu quoted Saraki.

The Senate President said it was equally important to begin to interrogate what happened to the measures aimed at cushioning the effect of the recession built into the 2016 budget and why they have not been implemented.

“We need to know why the promises of external borrowing has not materialised, why devaluation has not helped to strengthen the Naira,  why inflow of foreign currency has continued to dry up and interest rate is still very high. Doing this will help us to understand where we are, so that we can determine where exactly we want to go from here.

“In every crisis, there is always an opportunity for positive reforms, in this regard, in order to solve this crisis, all hands must be on deck. Ideas should be sourced from all quarters. All arms of government, people of different political beliefs, from all socio-economic backgrounds and every part of Nigeria must work together at this time” he said.

He said the Senate will meet with stakeholders in the private sector to ensure it collates a broad spectrum of opinions while formulating ideas to stimulate the economy.

He said all political leaders should be worried about the suffering that the ordinary people are going through and that it is necessary for leaders to further empathise with the people. He commended the people for their perseverance and understanding.

While calling on the people to exercise patience and know that political leaders are genuinely concerned about their plight, Saraki said: “The positive attitude demonstrated by our people during the Eid-el-Kabir festival gave me hope that we in the leadership of the country should move swiftly to tackle this economic crisis. We have no option and this we must do without delay. I commend and praise our people for their perseverance and understanding”, he said.

Saraki also appealed to newsmen and women around the country to play a more positive role in reporting on issues that are important to the development of the country, highlighting that the fourth estate has to work harder to inform the public based on facts.

“I want to use this opportunity to advise those politicians who specialise in causing division between the executive and legislature for their personal benefit to know that this is not the right time for them to ply their trade. We need all arms and levels of government to work together with the people because we are in an economic emergency and all hands must be on deck”, he said.