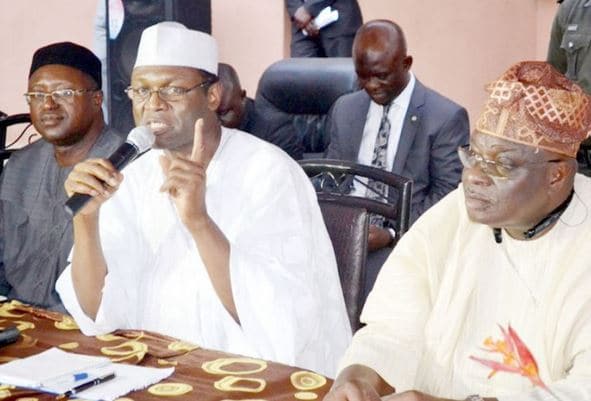 The Independent National Electoral Commission (INEC) has no plan to postpone the conduct of the Ondo governorship election scheduled for Saturday, 26th November 2016.

The election umpire stated this in its daily bulletin of Wednesday, 23 November, 2016.

Addressing a Stakeholders Forum yesterday at Akure, the INEC Chairman, Professor Mahmood Yakubu, said the Commission was fully prepared to conduct the election, stressing that there was no ground in law to postpone the election.

Professor Yakubu told stakeholders in apparent reaction to those calling for a postponement of the election, that the Commission under his watch would continue to operate strictly within the confines of the law.

The INEC Chairman emphasized that the Commission took the conduct of the Ondo governorship election seriously. And to underscore this seriousness, he explained, the Commission was deploying three National Commissioners to supervise the election in each of the three Senatorial Zones and six Residential Electoral Commissioners (RECs) to assist the REC in charge of Ondo State.

Of the one hundred and forty elections conducted since the inauguration of the Commission under his watch, Professor Yakubu noted that not a single one was nullified, including the controversial Kogi governorship election, which was later upheld by the Supreme Court.

Professor Yakubu explained that out of the fourteen activities enumerated in the Timetable and Schedule of Activities for the Ondo governorship election which was issued in March this year, the Commission had thus far implemented a record twelve.

In his address, the National Commissioner in charge of the South West geopolitical zone, Prince Solomon Adedeji Soyebi, said the Stakeholders Forum was consistent with the Commission’s policy of transparency and inclusion.

He noted that the Commission had faithfully implemented the activities articulated in the Timetable it issued six months ago and prayed that the citizens of Ondo state who had thus far carried themselves with maturity, tolerance and high sense of responsibility, would demonstrate the same qualities on Election Day.

In his own remarks, the Resident Electoral Commissioner for Ondo state, Olusegun Agbaje, said the Commission was more than determined to conduct a very credible and acceptable election.

Mr. Agbaje who debunked rumours that the Commission planned to rig the election in cahoots with a political party, asserted that INEC would never do anything that would diminish its current level of credibility.

The Inspector General of Police, Ibrahim Kpotun Idris, assured that the Police had put in place an elaborate plan to secure the election. He however canvassed the support of all stakeholders.

He said the election will be supervised by one Deputy Inspector of Police and three Commissioners of Police in charge of the three Senatorial Districts.

The Success Of the Commission Depends on The Staff
The success of the Independent National Electoral Commission (INEC) is hinged on the quality of staff at any given time.

The INEC Chairman stated that because the staff constituted the essence of INEC, the Commission was always thinking of how to improve staff welfare. In concert with this, he announced: “We’re working at the prospect of a special salary structure for good governance, sustenance of our democracy and sanity of our country.”

He expressed optimism that the staff would reciprocate the Commission’s efforts by putting in their best at all times. The INEC Chairman pledged to continue to build the capacity of staff and to expose them to observation of international elections.

Mr. Agbaje described the staff of INEC, Ondo State as “wonderful.” He ascribed whatever he had achieved in the state to the staff. “Any achievement of mine is theirs, Mr Agbaje enthused.

The REC assured the INEC Chairman that he and his staff would give in their best to ensure that the Ondo State governorship election scheduled for Saturday, 26th November 2016 was concluded on the first ballot.