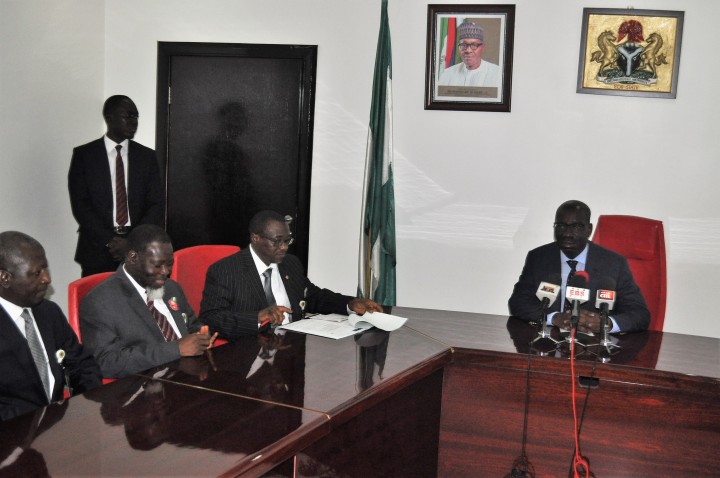 Governor Godwin Obaseki has said that Edo State was ready to massively develop the rural, especially the oil producing communities, to create job opportunities for the teeming unemployed youths of the state.

A statement by the Chief Press Secretary, Mr. John Mayaki quoted Governor Obaseki when he received the Group Managing Director(GMD) of the NNPC, Dr. Maicanti Baru in Government House, Benin.

He said youth engagement by the state government and its partners would obviously address the disturbing cases of restiveness and other nefarious activities that usually hinder the social-economic development of any society.

Governor Obaseki, therefore, reiterated his administration’s earlier promise to empower youths of the state, saying “part of our promise is to create a minimum of two hundred thousand jobs over the next four years.’’

He noted that “one of the things we need to do to stabilize those communities is to give the young people opportunities. So, we are revamping our technical schools.

“We are revamping our vocational sector and also reviewing our school curriculum to ensure that the kind of education we offer is such that will give them work when they finish school.
“We want to emphasize this more in the oil producing communities. Our plan is to pool in resources:
“Resources from your partners, resources from the agencies of the federal government and our own EDSOPADEC , and have a plan, more like a master plan for oil producing communities.”

The governor added that “we will be sharing with you in the next couple of months our own plan which is more like a master plan for our oil producing communities.

“So that whatever fund the Corporation or its partners intend to direct to those communities will be coordinated so that we can get more value for money going in there.
Governor Obaseki added that “We will also emphasize what we think is most important because we need rapid development for those communities. Training and vocational training are our priority.

“We want to thank you for this visit and to assure you that in us, you have a host community who understands you and we are willing to work with you,” he said.
Speaking earlier, Dr. Maicanti Baru congratulated Obaseki on his election as governor and pledged to support him in his quest to establish industries in Edo State.

He said, “Let me use this opportunity to congratulate you as the Executive Governor of Edo State on your successful election as the Governor of Edo State.
“This election is a further testimony of the confidence the entire Edo people repose in your leadership capabilities to take Edo to the next level. I could hear the vibrancy with which you want to elevate the State.

“We in NNPC promise to support you in your aspiration to bring industrial elevation to the State.

“Your aspiration to build an industrial park will be heavily supported both in terms of gas supply,’’’ he said, adding that “ if it requires us to partner in power generation, we will also do.”

The NNPC GMD appreciated the state government’s commitment in providing a safe haven for investors in the state through its massive investment in the security of the state.

“I would like to appreciate the support of the Edo State Government in its efforts with the various security agencies in the state towards safeguarding our upstream subsidiary companies: NPDC and IDSL, pipelines, depot, retail outlets and other facilities and personnel.

While lamenting the increasing level of vandalism of the Corporation’s facilities, he said “as you may be aware, the Nigeria’s energy supply security is underpinned by a network of over thirty thousand kilometers of pipelines which we use to transport crude oil, natural gas and petroleum product.

“A major segment of these pipelines transverses the state and these critical national assets have become the subject of incessant vandalism, theft and sabotage.
“The downstream segment of petroleum product supply and distribution has not fared any better. ‘’

According to him, “Product pipelines have also suffered huge losses with the attendant cost of repairs.

“ For example, the Warri – Benin pipeline has almost become impossible to upgrade because when you put products from Warri refinery, almost fifty percent of these products is either stolen through tapping of the pipeline or outright vandalism.

The NNPC GMD, who said it had become difficult for the Corporation to operate these pipelines with the massive level of colossal losses, appealed to the Governor for help in the area of security.

“Your Excellency, we need a lot of your help with your counterpart in Delta State.
“It is on this premise that we wish to kindly solicit your Excellency’s further support in the area of sensitizing the good people of Edo State against sabotage of the nation’s oil assets and the adverse effects on the communities, environment and the economy,” he said.