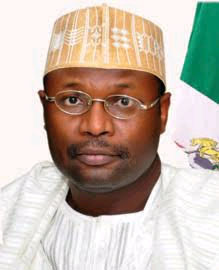 Chairman of the Independent National Electoral Commission (INEC), Professor Mahmood Yakubu, has disclosed that with the cooperation of the Nigerian Police Force, 61 cases of electoral offenses have been successfully prosecuted since after the 2015 general elections, the highest number of successful prosecutions that the Commission has ever achieved.
The INEC Chairman made the disclosure yesterday, when the team of Special Investigative panel on the December 10, Rivers state Legislative Re-run elections, set up by the Inspector General of the Police, Ibrahim K. Idris, visited the Commission’s Headquarters in Abuja.
He said: “We have cooperated with the security agencies in the past, especially the Police, in prosecuting electoral offenders. Since the 2015 general elections and the re-run elections in 2016, we have received 120 Case Files from the police for prosecution”.
Read Also; INEC To Investigate Own Staff over Rivers Election Crises
“I am happy to say that we have so far recorded 61 successful prosecutions as a result of the cooperation of the security agencies. The biggest one came after the disruption of the April 2016 re-run election in Kano state in a State Constituency election in Minjibir Local Government when over 40 offenders were successfully prosecuted in a joint effort between the Commission and the security agencies,” he added.
He expressed the Commission’s resolve to investigate and sanction erring staff, Professor Yakubu said: “On our own as a Commission, we have also set up an Administrative Review of what happened in Rivers so that where our staff is found to be culpable we will deal with the situation. We have very conscientious staff in the Commission, but where our staff erred, this will be dealt with”.
Read Also; Rivers Re-Run: INEC Cautions Politicians against Inciting Comments
He pledged the Commission’s readiness to cooperate fully with the Investigation Panel to ensure that perpetrators of the violence and killings in the Rivers re-run elections were brought to book. He Said: “I wish to assure the investigative panel that we will now and forever, fully cooperate with the security agencies in your investigation. Whatever you require facilitating the investigation from the Commission, be rest assured that the Commission will be forthcoming”.
The INEC Chairman commiserated with the security agencies for the loss of lives recorded, particularly the death of DSP Mohammed Alkali and his orderly who were killed on duty in the Rivers re-run elections in what he said was supposed to be a peaceful process of election.
Earlier, the leader of the delegation and head of the Investigative Panel, Deputy Commissioner of Police, Daniel Okoro, explained that the purpose of the visit was to felicitate, interact and introduce the members of the panel made up of Police Officers and Officers of the Department of State Services (DSS).
He sought the Commission’s cooperation to aid the successful execution of the national assignment by his team.