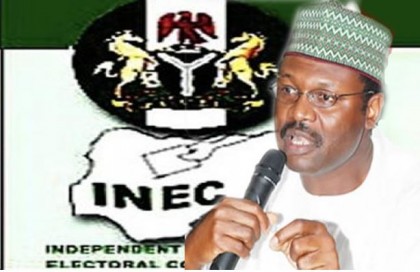 Chairman of the Senate Committee on INEC, Senator Ali Ndume, has pledged to support the Independent National Electoral Commission (INEC) to improve on the successes achieved in the 2015 general elections. He noted that 2015 was a turning point in the electoral process in the country.
He made the pledge yesterday, when the Chairman of the Commission, Professor Mahmood Yakubu, led top management staff of INEC to the National Assembly to defend the Commission’s 2017 budget.
Senator Ndume said:  “I think it was the elections which we had in 2015 that reflected the wishes of our people and that’s why, because of the credibility of that election and the universal acceptability of the election, the strongest opponent was returned the winner and that was a turning point for this country”. Read; INEC Warns Of Early Campaigns In Ekiti State In 2018
He however pointed out that the 2015 general elections cannot be said to be perfect. Said he:  “It was good; but can be made better in 2019”.  Senator Ndume stressed that: “Nigerians are expecting more credible elections that requires the Card Reader to work, that requires the materials to be on ground on time, that requires polling stations to open by 8.00am, that requires that people will go freely to elect the candidates of their choice. So we are looking up to you”. Read; Implementing EU Recommendation Will Strengthen Electoral Process – INEC Chairman
“We want to assure you that this team is ready to give you all the assistance that you require to succeed, because if you succeed, we also succeed,” he assured.
Chairman of the Commission, Professor Mahmood Yakubu, disclosed that the Commission’s budget for 2017 was 45 billion. He gave a summary break down of the budget as: 20.9 billion naira for personnel cost; 2.5 billion naira for overhead cost; 19.1 billion naira for Electoral; and 2.3 billion naira for Capital expenses. Read; INEC Constitutes Committees On Review Of Electoral Constitution, Diaspora Voting And Three Others
The INEC Chairman expressed delight that out of 165 elections conducted under his watch, only one has been nullified so far.  He expressed the determination of the Commission under his leadership to improve on the achievements on his predecessor, Professor Attahiru Jega.