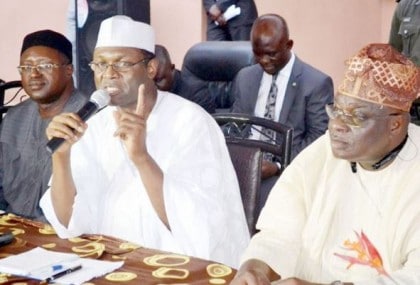 Chairman of the Independent National Electoral Commission (INEC), Professor Mahmood Yakubu, has commended the laudable contributions of the Civil Society Organizations (CSOs) to the health of our democracy and the management of elections. He said:  “reports from the CSOs during elections are helpful in fine-tuning the ongoing processes and procedures in the field but equally importantly, are the reports that you forward to the Commission after each election containing a number of very useful recommendations”.
Professor Yakubu, gave the commendation today (15/3/17) during the Commission’s quarterly Consultative meeting with Civil Society Organizations held at the Commission’s Headquarters in Abuja. Also Read; Breaking: Dice Is Thrown For 2019 General Election As INEC Releases Time Table
He said: “The CSOs, we believe are in the forefront of not just activism but institutional memory and detailed knowledge of our elections and electoral processes. There is no election in this country from general elections to bye-elections which the CSOs do not deploy their observers irrespective of terrain and circumstances”.
The INEC Chairman disclosed that: “Nationwide, from the Kogi governorship election to the last Rivers re-run, INEC accredited 468 observer groups and literarily you deployed thousands of personnel. The highest deployment was Kogi, followed by Bayelsa, the Federal Capital Territory (FCT), Edo and Ondo states. ”Also Read; 28 INEC Indicted Staff Over Rivers Rerun To Face Disciplinary Action, Commends Outstanding Staff
He assured the CSO community of sustained partnership in the management of elections in Nigeria and pointed out that: “some of the actions we have taken, we have already implemented some of the recommendations you have made even if we don’t give credit to specific CSOs…what is most important is the health of our democracy and the management of our elections rather than individuals taking credit”.
Some of the key issues discussed at the meeting include:
Plans and preparations for elections, from strategic plan to the distribution of uncollected PVCs to outstanding elections and many more;
Violations of the Electoral Act and actions taken by the Commission so far;
Matters arising from judgments of Election Petition Tribunals and the regular courts; and
Presentation of new ICT initiatives including data on the 2015 presidential election and the new portals by our ICT department.
Responding on behalf of the Civil Society community, Mr. Clement Nwankwo, a Director at Policy and Legal Advocacy Centre (PLAC), commended INEC for the institutionalization and early release of general election dates and also, The Commission’s appropriate response to the situation in Rivers state by setting up its own committee of inquiry.
He however raised concerns over the alleged interference of Security agencies in elections citing the Edo and Rivers state examples. Said he: “one of the key conversations in Nigeria today is the role of the Security services in elections. Rivers state was example of interference i.e the security in elections in this country which is certainly unacceptable to Nigerians. Edo state was another example of the security services interfering in the electoral process by trying to dictate dates for the elections which we felt was a major interference in the independence of INEC. ”
“What we will like to hear from you, is to what extent the Commission is taking this matter to the security services, because we believe their involvement in elections in trying to dictate the dates of election is a major interference, seeing security officials going to ballot centres and collation centre’s even being accused of involvement of the electoral process is a major setback for our democracy and we would like to see how serious the Commission is taking,” he said.
OUR ERROR
Yesterday, we inadvertently listed the National Conscience Party (NCP) as one of the ten parties that were de-registered but later restored by the Commission based on a Court Order.  We have since learnt that the NCP was never de-registered in the first instance. The error is regretted.
The Political Parties which were de-registered but have since been restored based on a Court Order are:
1.          Better Nigeria Progressive Party (BNPP);
2.          Peoples Redemption Party (PRP);
3.          Peoples Progressive Party (PPP);
4.          Democratic Alternative (DA);
5.          National Action Council (NAC);
6.          National Democratic Liberty Party (NDLP);
7.          Masses Movement of Nigeria (MMN);
8.          Nigeria Peoples Congress (NPC);
9.          Nigeria Elements progressive Party  (NEPP); and
10.      National Unity Party (NUP)