The National Chairman of the All Progressives Congress (APC), Chief John Oyegun, has commended the Speaker of the House of Representatives, Hon. Yakubu Dogara for his unflinching support and loyalty to the APC-led Federal government. 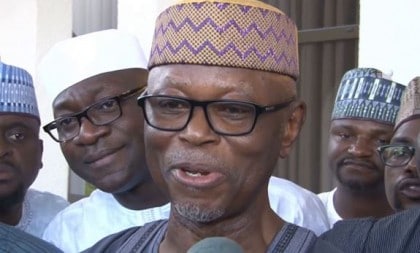 Chief John Oyegun, The National Chairman of the All Progressives Congress

Chief Oyegun made the commendation Thursday evening when he led members of the party’s National Working Committee on a “thank you” visit to the Speaker and members of the APC caucus in the House.

Speaking to journalists after a closed-door meeting with the MPs that lasted about two hours in the National Assembly, Chief Oyegun said the House of Representatives under Dogara has been very supportive of President Muhammadu Buhari’s administration and deserved to be appreciated.

He further disclosed that they also discussed the progress of the 2017 Appropriations bill which is presently going through the legislative mill in the parliament.

“As you can see we are all smiling. We discussed general issues; the budget and the progress it is making,” he stated.

The APC National Chairman also confirmed that APC members in the House do not owe party dues and commended them for their show of loyalty.