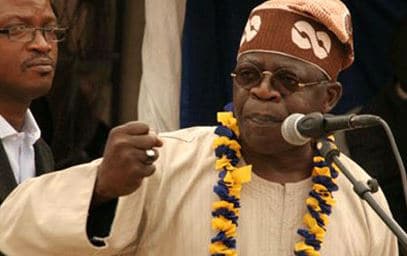 Tinubu At 65, A Dogged Fighter For Democracy – Dogara

The Speaker, House of Representatives, Mr Yakubu Dogara, has described Sen. Bola Tinubu, a former governor of Lagos, as a dogged fighter for democracy.

In a statement issued on Tuesday by his Special Adviser on Media and Public Affairs, Mr Turaki Hassan, the speaker described Tinubu as a leader, man of vision, on his 65th birthday.

According to Dogara, Tinubu has continued to make invaluable contributions to democratic governance in Nigeria.

“He is undoubtedly one of the leading lights of our modern democracy and I can only say this based on the part I have touched.

“I see him as someone who is demonstrating the attributes of a true, but not a regional leader.

“Some, who thought he had everything cut out for him in the South-West and may not be able to play on a more national platform, got it wrong.

“They saw how he, together with some other committed leaders in this country, midwifed a political organisation that so many pundits believed could not see the light of the day.

“In the history of this country, for the first time, an opposition party which was built on some blocks, including Tinubu, succeeded in wrestling power from the hands of the ruling party.”

The speaker prayed for Tinubu to age gracefully and in good health.

“Some of us who have come to see him as a mentor, will continue to learn more and drink from the fountain of his wisdom,” Dogara added.