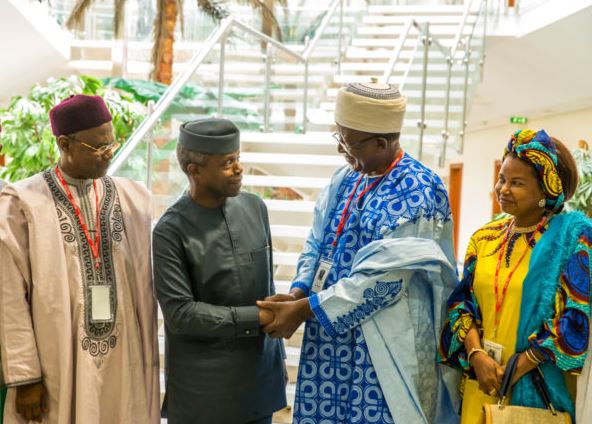 The Greatness of Nigeria Lies In Its Diversity And Size – Osinbajo

Nigeria’s Vice President, Prof. Yemi Osinbajo said that the greatness of a nation lies in its diversity and then in the size of the country.

Osinbajo said this while Speaking to a delegation of the northern socio-political group, the Arewa Consultative Forum (ACF) who visited him in his office today at the State House, Abuja, Vice President Osinbajo condemned those who see nothing good in the unity of this country.

“A lot of those who say we are better divided as a nation, don’t understand that the greatness of this country lies first in its diversity and then in the size of the country”, he said.

He averred that with the diversity and huge size of the country, “it is better to be a part of a great thing than to be one tiny part of something that is not necessarily great.”

“So, I think that we must not allow those who advance personal causes to defeat the very strong objectives of bringing this country together as a nation and forging ahead”, he submitted.

He told the delegation made up of eminent personalities from the northern part of the country, that President Muhammadu Buhari is one leader who possesses the willingness and passion “to ensure this country is a united country”. He added that the President has shown that “this country has men who are determined to remain honest, straight forward and are able to speak their minds without deceit.”

Before being presented with publications of ACF by the Deputy Chairman and leader of the delegation, Alhaji Musa Liman Kwande, the Vice President expressed support for the proposed security summit being organized by the Forum. He also underscored the importance of the security summit at this time in the nation’s history, saying “it’s a very important thing, the security of this country is a very important thing”.

Earlier, in an address read by the Vice Chairman of the Forum, Senator Abubakar Girei, the Chairman of Arewa Consultative Forum, former Inspector-General of Police, Ibrahim Coomassie, lauded the Federal Government under the leadership of President Muhammadu Buhari for its achievements especially in degrading insurgency in the North East.

He informed the Vice President that the Forum is organizing a security summit that will bring all stakeholders together to articulate strategies that will address the menace of insecurity and proffer practical solutions towards ensuring sustainable peace and development in the country.