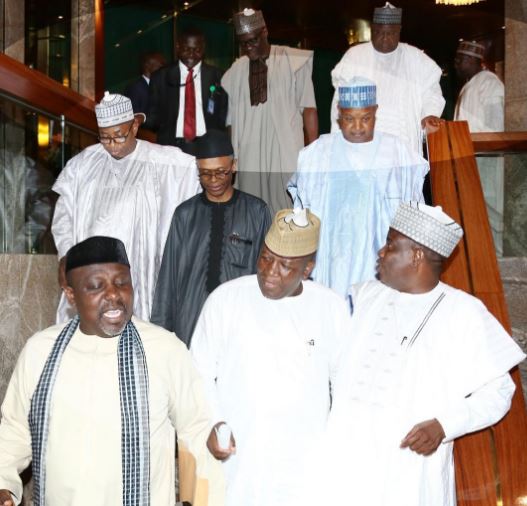 The All Progressive Congress (APC) controlled states under the auspices of the Progressive Governors Forum (PGF), have proposed the setting up of a Security Trust Funds to tackle security challenges in the country.

The News Agency of Nigeria (NAN) reports that this was part of the recommendations reached at the second quarterly meeting of the Secretaries to the Governments of APC-controlled States in Sokoto.

The meeting had as its theme: ”Setting Enabling Framework for Implementation of Progressive Governors’ Forum Policy Briefs.”

A Communique issued at the end of the meeting in Sokoto on Saturday said that ”the plan to set up the fund was in furtherance of the decision reached at its inaugural meeting held in Lagos.

”A critical aspect of it proposes that at least 1% of total costs of all contracts awarded by States and Local Governments be paid into the Trust Fund.”

The communiqué which was signed by the Secretary to the Sokoto State Government, Prof. Bashir Garba, commended the Federal and States Governments’ efforts in tackling security issues in Nigeria, particularly in the North East.

”Recognising paucity of resources in the country, particularly the effects of the recession, it becomes imperative to enhance the generation of resources in each of the APC states to engender implementation of policy initiatives.

”In this regard, the meeting acknowledged the critical need for enhanced revenue base of States.

”It recommends that States should adopt and adapt the Collection and Administration of Revenue Model law proposed by the PGF Secretariat to establish an Internal Revenue Service (IRS),’’ it added.

It expressed happiness with the recent securing of the release of 82 of the abducted Chibok girls.

On agriculture, the meeting stressed the need to address the dual challenges of poverty and unemployment across the country, adding that the agricultural sector is a common platform to address these issues.

‘’The agricultural sector is the main stay of the economy, hence there is the need for it to be taken to higher level.

”To this end, APC state governments as a bloc should align their agricultural policies with those of the Federal Government to maximize their benefits.

”The States should also work with the private sector to strengthen all year farming through increased investment in irrigation, farm mechanization, expand land utilization and introduce smart and precision agriculture.

‘’There is also the need to develop clusters of farmers within and across states and provide supports to the clusters across the value chain.

”To achieve this requires investing at least 10% of state budget on agriculture and the political will to ensure release of funds, proper utilization on knowledge and data base agriculture.

”It is important to develop integrated agricultural policy that provides linkages across sectors of the economy and society, like water resources, education, health, energy and industry, among others.”

On the state of education in the country, the meeting noted that the sector, particularly at the basic and post basic levels, was well acknowledged by stakeholders.

”In this regard, it becomes imperative to consider solutions as cross cutting in all the APC States.

”Although there are programmes and policies of Federal Government that are very beneficial, but states have problems accessing these benefits.

”It is recommended that APC states should fashion their education policies in a way that allows them maximise these benefits.

”Further to this, a policy of compulsory skill acquisition for all young school leavers to make education relevant to society should be put in place.

”The APC states should aim to amend the UBEC Act, towards changing the ratio of the counterpart funding to a lesser percentage for states.

”A Public Private Partnership funding arrangement should be adopted, while also seeking funding from Development partners,” the meeting recommended.

In the same vein, the meeting agreed to continually share information, ideas and knowledge through its quarterly meetings and the PGF Secretariat.

It added that this would promote synergy across the member States and facilitate greater cooperation for sustainable development.