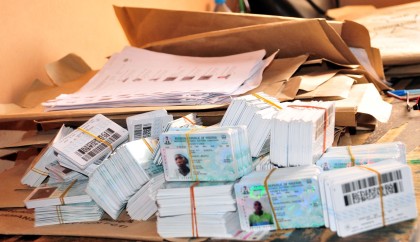 The Independent National Electoral Commission (INEC), in Kano state, says it has registered 41,143 voters in the state since the commencement of the Continued Voters Registration (CVR) exercise on April 27.

The Commission’s Administrative Secretary, Alhaji Bala Shittu, disclosed this while briefing newsmen on the first quarter of the CVR and the distribution of Permanent Voter Cards (PVCs) to the owners in Kano on Wednesday.

He said the state was given approval for the creation of 10 additional centers to improve the efficiency of the exercise in the last three months.

He listed the new centers, which were spread across the 10 council areas of the state to include: Tarauni, Kumbotso, Gwale, Nassarawa, Dala, Wudil, Rano, Bunkure, Kano Municipal and Gwarzo local government areas.

According to him, at the end of the first quarter, 1,123 out of the 250,000 PVCs that were not collected by the voters after the previous voters registration were distributed.

He said that 4,740 persons came to make correction on their voter cards, while 4,018 requested for the correction of omissions on their cards during the first quarter of the exercise.

The administrative secretary added that the commission also recorded 810 persons, who requested for a new PVC, 719 were seeking for the transfer of their polling unit to another location, while 1,189 were defaced.

He disclosed that the commission had scheduled July 24 to July 28 for the display of preliminary voters register for those who registered during the first quarter of the registration.

He said that the second quarter of the exercise would commence from July 31, during which the PVCs of those registered in the first quarter will be produced and distributed. (NAN)