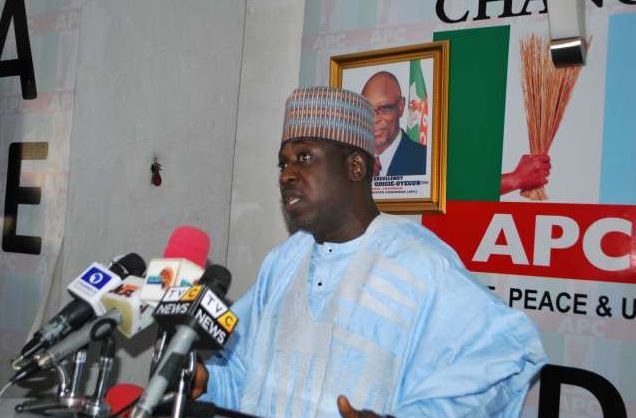 APC Refutes Purported Suspension Of A National Official Of The Party

The All Progressive Congress (APC) has refuted the purported suspension of the National Legal Adviser Dr. Muiz Banire. The National Publicity Secretary of the party, Mallam Bolaji Abdullahi stated this in press release issued on Friday.

“The attention of the National Working Committee (NWC) of the All Progressives Congress (APC) has been drawn to the purported suspension of the Party’s National Legal Adviser, Dr. Muiz Banire (SAN) by the Party’s executive committee in Mushin Local government area of Lagos State.

“We wish to state categorically that the purported suspension is a nullity as the local chapter of the Party does not have such powers to suspend a national officer.

“According to the Party’s constitution, such powers reside with the National Executive Committee (NEC) of the Party.” He said.

Abdullahi advised Party members to channel whatever issues there might be, to the party structure and constitution that provides ample avenues for redress and dispute resolution.

“If the local chapter is unable to achieve a resolution, the NWC can and will wade in the matter to achieve amicable settlement.” He added.

NEWER POST#ConstitutionReview: How The House Of Reps Voted On All The Bills
OLDER POSTAbduction of FRSC Official By A Bus Driver Leads To Car Crash