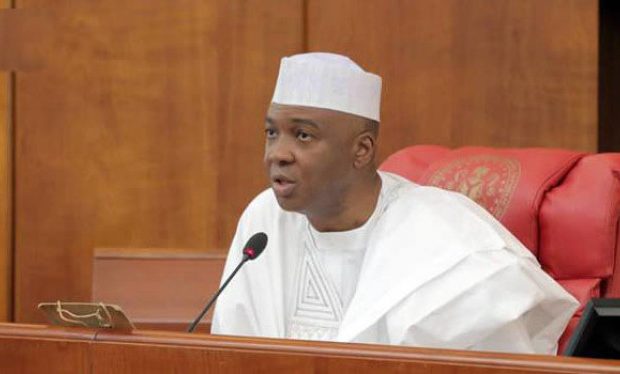 Constitution Review: Sentiments Responsible For The Rejection Of Devolution of Power – Saraki

President of the Senate, Dr Bukola Saraki, has blamed sentiments from parts of the country for the rejection of devolution of powers clause in ongoing 1999 Constitution review by lawmakers.

Saraki made this known when he appeared on News Agency of Nigeria (NAN) Forum in Abuja.

He said that if the voting on the amendments had come months before agitations for restructuring and inciting remarks from some Nigerians, it would have scaled through.

According to Saraki, the fact that it did not pull through means that there are some Nigerians that are not sure of what it is, and a lot of people equated devolution of power with restructuring.

“This was why I said when I was in Ilorin that we should all blame ourselves because I think the commentaries by sections, groups and individuals have built a lot of mistrust.

“If the constitutional review had come like eight months ago, the devolution clause would have passed.

“All of these issues created this mistrust as people are not sure of what it is all about and are having insinuations that some people want to play a fast one on them.

“So, those who were skeptical said they were not ready to support this and as I keep saying, we are a country of multiple religions, multiple ethnicity, which must be respected,’’ he said.

The president of the senate said that as a diverse nation with different ways of life, it was important to appreciate the concern of everyone on the state of the nation.

He said “you can’t bully people to go one way because that is the way you want it.

“The Constitution has said two-thirds; if you say two-thirds, that means you must have the buy-in of more than majority of the people.’’

However, Saraki assured that it was not the end-of-the-road for the clause in the amendment, saying that he was optimistic that if re-presented for voting, it may scale through.

He called for adequate education, awareness creation and engagement of major stakeholders on the matter.

According to Saraki, with adequate education, those with reservations will better understand the place of devolution of powers in the unity and development of the nation.

He explained that allowing states to handle functions like stamp duties, railway construction and investment, for instance, would bring to bear the benefits of devolution.

He pointed out that if Nigerians were properly enlightened to appreciate the benefits of devolution rather than the sentiments being built around the matter, the country would be better for it.

The president of the senate also explained that the lawmakers that voted against the clause and similar ones, may have taken the side of caution, not to attract the wrath of their constituents.

He urged them to use the period of the National Assembly recess, which began on Thursday, to consult more with their constituents on the clause so that when re-presented on resumption, it could scale through.

He urged Nigerians not to lose hope as such rejection was common in parliaments and was not peculiar to Nigeria.

Saraki said that important matters like devolution of power in other climes suffered the same fate, adding that in most cases, they were re-presented with adjustments after further consultations.

“I have given many examples. Even America that we copy, a lot of you must have been following in the last few months the Health Bill issue in America.

“They attempted seven times and that is just a health bill. They go, they fail, they adjust and they come back.

“They do not say because they failed, they would begin to insult everybody that did not agree.

“If we want this bill to pass, it is the same people that will have to make it pass. So, we cannot blackmail or bully them. We must convince them and get their buy-in.

“We all need to understand the process. First of all, constitutional review by its nature is not a bill that will just pass through the normal process.

“It needs two-thirds and that means they must be issues that a majority of Nigerians want.

“Secondly, because of the net effect of it, it is important that wide consultations are done. When you say all Nigerians want something, you will see it in the vote,’’ he said.

Saraki maintained that he was hopeful that devolution of powers would receive the nod of majority of the lawmakers after the recess.