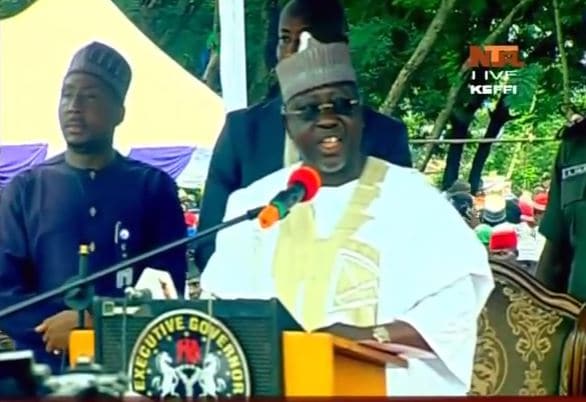 Governor Tanko Almakura of Nasarawa State says a committee of Northern governors and traditional rulers will soon come up with a stand on restructuring in the region’s and country’s best interests.

Almakura stated that the committee is being led by the Gov. Aminu Waziri Tambuwal of Sokoto State.

The Nasawa State governor made this known on Saturday at the official installation and presentation of first class staff of office to the new Emir of Keffi, Dr. Shehu Chindo Yamusa III,  in Keffi Local Government Area of the state.

“I wish to say that in spite of the numerous provocative statements credited to some unpatriotic elements cloaked in the guise of restructuring, I want to assure everyone that a joint committee headed by Gov. Aminu Waziri Tambuwal, the Governor of Sokoto State, comprising Northern governors and traditional rulers would soon come up with a common position that will be in the best interest of not only the North, but Nigeria as a whole.

“Since our coming on board, we have remained consistent in our determination to ensure the inclusion of traditional rulers in the Constitution of the Federal Republic of Nigeria to enable our Traditional Institution to continue to play its pivotal role as custodian of our traditions, customs, and heritage.

“We have since incorporated the traditional institution into the machinery of governance in Nasarawa State by engaging them in the affairs of government at all levels in the state.

“This has availed government of their wealth of experience and doggedness in our governance of Nasarawa State and, indeed, the conscience of the society.

“It is our conviction that when this is done, the traditional rulers will more proactively complement government efforts toward the development of our society,” he said.

Almakura also noted that the state government has embarked on robust infrastructural development in Keffi and environs.

“We have networked the city with asphalted roads and completed the abandoned Keffi Modern Market which will open commercial activities for the people.

“We have also awarded contract of about N400 million for the construction of a bridge over Antau River to link the municipality of Keffi with other communities,” he added.

He urged the monarch to abide by the oath of office and to discharge his duties without fear or favour to promote peace and socio-economic development of the country.

This development led to the appointment of his son, Dr.Shehu Chindo Yamusa III as the new emir on Dec.14, 2015.

The governor expressed gratitude to the governors, traditional rulers, and politicians within and outside the state, who attended the ceremony.

He called for sustained cordial relationship with one another in the interest of peace and tranquility in the country.

Responding, the new emir expressed appreciation to Almakura for the honour done him and gave an assurance that the Keffi emirate council would be loyal to the state government by providing all the support expected of it.

The first class traditional ruler pledged to initiate projects and programmes that would impact the lives of the people of the state and Nigerians at large.

Also, the Emir of Kano, Alhaji Sanusi Lamido and the Sultan of Sokoto, Muhammadu Sa’ad Abubakar 111 were among other traditional rulers and dignitaries that graced the occasion.