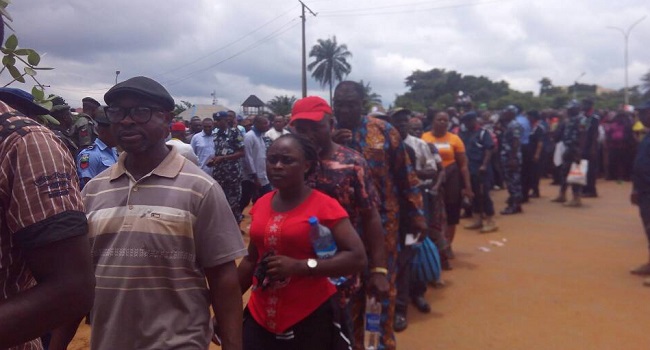 Isa Gusau, Maiduguri: Governor of Borno State and chairman of the Anambra State APC 2017 Governorship primaries committee, Kashim Shettima on Sunday declared the tedious electoral process that lasted for nearly 24 hours as the easiest election himself and members of his committee were ever associated with mainly ‎they had no candidate in mind and didn’t have any interest in who was to win.

The Governor made the remark before declaring the results which was won by Mr Tony Nwoye who scored 2146 votes to beat his runner up, Andy Uba who scored 931 votes while George Moghalu came third with ‎525 votes. A total of 4,333 votes were cast out which 4,302 were valid and 31 declared invalid.

The elections which was covered live by the Nigeria Television Authority, NTA held Saturday with collation and counting lasting throughout the night till about 4pm the following Sunday at the Dora Akunyili Development Centre in Awka.

This primary election was obviously a tedious one but for me and members of the committee saddled with the responsibility of conducting the election, this is the easiest election we have ever been part of or witnessed. You see, when you are an election umpire, election becomes difficult only when you you have interest in who wins the elections because by having interest, you have to battle with other contestants, battle with those who have different interests and battle with your own conscience in trying to bend the rules of the game to favour your interest. But so long as you are neutral as an election umpire, the election becomes easy. It is easy for all to know when you are trying to be fair and when you trying to be bias. I am very proud of each and every member of our committee for being absolutely unbiased.

I am very proud of observers from the APC National headquarters led by Presidential Adviser Ojudu. I am proud of the APC leadership in Anambra State and everyone that helped in making us stand by the principles of conducting a free, fair and credible primary election, particularly the security agencies. The Commissioner of Police did a wonderful job. I thank and commend the INEC observers for being with us all through the processes” the Governor said.

Shettima added that though as a Governor he was entitled to protocol reception from the Government of Anambra State, he deliberately rented a hotel in order to give room for questions over the integrity of the APC Governorship primaries (given the fact that the Governor of Anambra is seeking reelection). Shettima also said he totally avoided meeting all the contenders.

Kasim said “the winner of the election, Tony Nwoye was unknown to him whereas he was familiar with George Moghalu and Andy Uba (both of whom came 3rd and 2nd respectively. The Governor charged the APC members in Anambra State to work towards the victory of Nwoye as the next Governor of Anambra State saying that is the next task.”