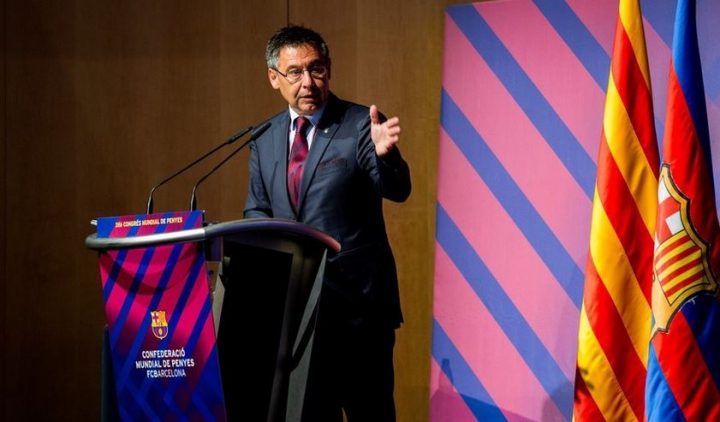 Barcelona President, Josep Maria Bartomeu has confirmed the possibility of the Catalan club exiting the Spanish league should the region gain independence from Spain.

The club president said the club would have to discuss the possibility of leaving La Liga if Catalonia gained independence from the rest of Spain.

A Catalan independence referendum, which has been deemed illegal, was marred by violence on Sunday, with Barca forced to play a 3-0 win over Las Palmas behind closed doors at the Camp Nou.

Bartomeu said Barca’s future in La Liga would need to be discussed if Catalonia ever gained independence.

“This situation does not exist so far,” he said on Monday.

“But with regards to things that can happen in the future, it is something that the board of directors would discuss. It would be something to analyse calmly.

He said the club will discuss the issue intensely to find the best solution. He added that if the independence happens, the board of directors will have to make a decision.

Catalonia’s sport minister, Gerard Figueras, has suggested that Barca could play in the Premier League if the region secedes from Spain, citing Swansea City as an example of a club from a different country playing in England’s top-flight.

“In the case of independence, Catalan teams in La Liga – Barcelona, Espanyol, and Girona – will have to decide where they want to play: in the Spanish league or a neighbouring country like Italy, France or the Premier League,” said Figueras.

“Now in Spain there teams from other countries who play in national leagues: clubs from Andorra in football and basketball.

“Monaco play in France, in England Welsh clubs. I don’t think that Uefa has anything against seeing another club play in a different league from their country.”

Barcelona have won the La Liga title 24 times and are holders of the Copa del Rey record with 29.