Gov Bindow To New Advisers: “Be Accountable to The People” 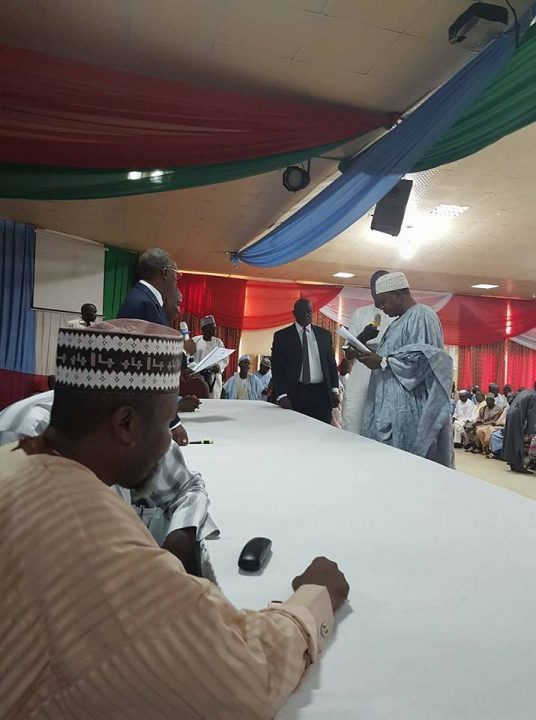 Six Special Advisers to Governor of adamawa state,  Muhammad Umaru Jibrilla Bindow, have been sworn in.

This was disclosed in statement made available the SA media and Publicity to the governor, Macauley Hunohashi on Tuesday.

Speaking shortly after presiding over the swearing in ceremony at the Banquate Hall of government house in Yola, Sen Muhammed Umaru Jibrilla, urged them to be transparent and accountable in line with the objective of the present administration.

The governor said his priority is to ensure equal distribution of dividends of democracy to the people of the state and described them as cream of personalities, whose weight would add to the present effort to develop the state.

He explained that the current development process is in the first phase and urged the advisers to continue to work together to compliment government effort to provide infrastructure for the people.

Chief of Staff to the governor, Alhaji Abdulrahman Abba Jimeta, felicitates with the newly sworn in advisers, emphasising that there would be similar appointments from other local government areas of the state.

Responding on behalf of the advisers, Ustas Jibrilla Mahmud, assured the governor of their support as party faithful.

He added that they will work toward attracting politicians to join APC ahead of twenty nineteen general election.

The oath of office was administered by the Commissioner of Justice Barrister Bala Silas Sanga.