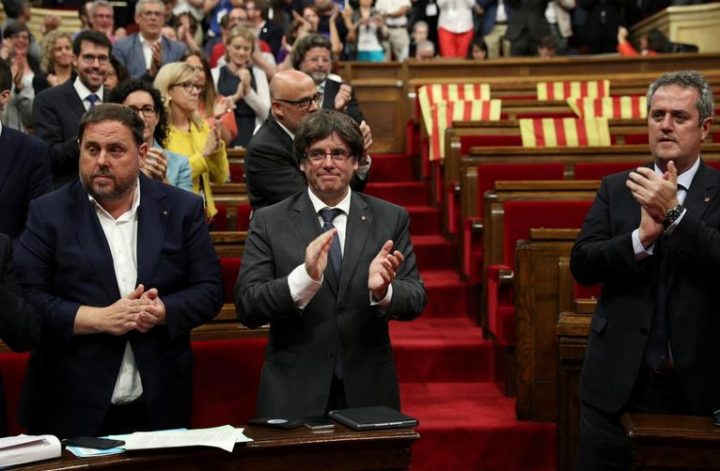 Catalonia’s parliament declared independence from Spain on Friday in defiance of the Madrid government, which at the same time was preparing to impose direct rule over the region.

Although the declaration was in effect a symbolic gesture as it will not be accepted by Spain or the international community, the moves by both sides take Spain’s worst political crisis in four decades to a new level.

Spanish Prime Minister Mariano Rajoy immediately called for calm and said the rule of law would be restored.

The motion passed in the regional parliament in Barcelona — which was boycotted by opposition parties — said Catalonia constituted an independent, sovereign and social democratic state. It called on other countries and institutions to recognize it.

It also said it wanted to open talks with Madrid to collaborate on setting up the new republic.

After the debate, lawmakers from members of three main national parties — the People’s Party, the Socialists and Ciudadanos, walked out.

Members of the pro-independence parties and the far-left Podemos then voted in 70-10 in favour in a secret ballot aimed at hindering any attempt by the central government to lay criminal charges on them.

Spanish shares and bonds were sold off when the result of the vote was announced.

Meanwhile in Madrid the upper house of Spain’s parliament, the Senate, was due to approve Article 155, the law that allowing the central government to take over the autonomous region.

“Exceptional measures should only be adopted when no other remedy is possible,” Spanish Prime Minister Mariano Rajoy said in an address to the Senate. “In my opinion there is no alternative. The only thing that can be done and should be done is to accept and comply with the law.”

The Catalan leadership was ignoring the law and making a mockery of democracy, he said.

After the Senate vote, Rajoy was expected to convene his cabinet to adopt the first measures to govern Catalonia directly. This could include sacking the Barcelona government and assuming direct supervision of Catalan police forces.

In the late 8th century, the counties of the March of Gothia and the Hispanic March were established by the Frankish kingdom as feudatory vassals across and near the eastern Pyrenees as a defensive barrier against Muslim invasions.

The eastern counties of these marches were united under the rule of the Frankish vassal the Count of Barcelona, and were later called Catalonia.

During the Franco-Spanish War (1635–1659), Catalonia revolted (1640–1652) against a large and burdensome presence of the Royal army in its territory, becoming a republic under French protection.

Within a brief period France took full control of Catalonia, at a high economic cost for Catalonia, until it was largely reconquered by the Spanish army.

Under the terms of the Treaty of the Pyrenees in 1659, which ended the wider Franco-Spanish War, the Spanish Crown ceded the northern parts of Catalonia, mostly incorporated in the county of Roussillon, to France.

During the War of the Spanish Succession (1701–1714), the Crown of Aragon sided against the Bourbon Philip V of Spain, whose subsequent victory led to the abolition of non-Castilian institutions in all of Spain and the replacement of Latin and other languages (such as Catalan) with Spanish in legal documents.

As wealth from the industrial expansion grew, Catalonia saw a cultural renaissance coupled with incipient nationalism while several workers movements appeared. In 1914, the four Catalan provinces formed a Commonwealth, and with the return of democracy during the Second Spanish Republic (1931–1939), the Generalitat of Catalonia was restored as an autonomous government.