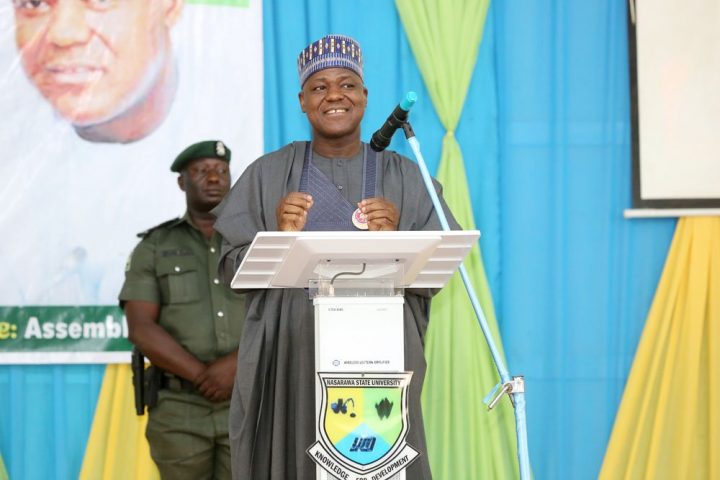 The National Assembly has contributed a lot in stabilizing and deepening Nigeria’s constitutional democracy through the strengthening of due process and the rule of law, Speaker of the House of Representatives, Hon Yakubu Dogara, has said.

Speaking on the topic, “Deepening Democracy: Role of the Legislature,” at the third Public Lecture series of Nasarawa State University, Keffi, on Monday, Hon Dogara said the Nigerian parliament’s contribution to deepening democracy through its various functions helped to stabilize democracy in the country.

Going down memory lane, the Speaker narrated how the bill he sponsored in the 7th Assembly which sought to simplify procedures for impeachment of the President and Vice President was defeated during the constitution amendment exercise.

He lamented that the provisions of section 143 of the 1999 constitution make it impossible for the National Assembly remove the President or Vice President and described it as “satanic verses”.

He maintained that democracy is a government of laws and not of men and that with provisions of section 143 in place Presidents can choose not to obey the law saying, “because he can choose the laws to obey without any retribution

“There can be no democracy without the active participation of the citizens. Any country where the government fears the citizens then it is a democracy.

He declared, “The legislature in Nigeria has contributed immensely in deepening the practice of constitutional democracy in Nigeria, especially since the introduction of the 1999 Constitution, in its various functions. If Democracy rests on the Due process and the Rule of Law, it, therefore, means that our Democracy can only be as deep as the laws upon which it is built.”

The Speaker also noted that the 8th House of Representatives under his leadership as Speaker has made outstanding contributions to deepening democracy in Nigeria through the faithful implementation of its Legislative Agenda, which serves as a compass of its legislative activities for four years (2015 – 2019) to deepen democracy in Nigeria.

He added that the 8th Assembly achieved this by providing leadership in the areas of accountable and transparent government, citizens engagement, constituency representation, collaboration with its counterpart in the Senate and other arms of government to legislate for the common good of the Nigerian people, legislation to create reforms in Nigeria’s national economy and development, tackle poverty, unemployment, confront the scourge of corruption, terrorism and security challenges in the country, environment and reduction in the cost of running the government, reduce wastage and tackle National Revenue leakages.

The Speaker also said other areas the House has been committed to playing its part include rescuing Nigeria from the clutches of hunger, poverty, disease, social, economic, political and infrastructural quagmire and ensuring transparency and accountability, not just by the House of Representatives but also by the government at all levels.

“Even the most casual observer of Nigeria’s democracy in the last three electoral cycles would admit that despite perceived gaps in the exercise of its oversight mandate, the legislature at the national level has achieved a modicum of institutional growth. At the national level, the legislature is increasingly becoming more assertive in the process of law making,” he stated.

Hon Dogara said it was in view of the fact that a weak legislature is antithetical to good governance and consolidation of the country’s hard-won democracy, that the National Assembly, through various legislative measures, intervened to specifically strengthen the Legislative institution in order to position it to play its prominent role in our constitutional democracy.

“The National Assembly amended the Constitution in 2010 that placed it on the first line charge, thereby ensuring its relative financial and administrative autonomy.

“Furthermore, the National Assembly set up the National Institute of Legislative Studies to provide crucial capacity enhancement for legislators, legislative staff and the institution as a whole.”

On issues of national unity and resolving crises and stemming centrifugal forces in Nigeria, he appraised the legislature as outstanding, citing, among others, examples of the enactment of The Niger Delta Development Commission (Establishment) Act 2000 and The Revenue Allocation (Allocation of On Shore-Off Shore Dichotomy) Act, 2004 for which the National Assembly overrode a presidential veto, and the North East Development Commission Act, 2017 to rehabilitate, reconstruct and re-develop the zone.

He also noted that the legislature shares in the success of Nigeria’s 2011 which were acclaimed the most credible since 1999 and that the 2015 general election was even much better because of the specific interventions on electoral reform as contained in the First and Second Constitution Alteration Acts, 2010-2011 to grant the financial independence of INEC, consent of the Senate for the appointment of State Independent Electoral Commissioners, enhance internal party democracy through the introduction of compulsory party primaries with monitoring by INEC, authorising INEC to de-register Political Parties, the introduction of electronic accreditation by INEC, among others.

“These include investigations on the award of contract for the rehabilitation of Nigerian Railways; Installation of CCTV Cameras in Abuja and Lagos, alleged $17 billion stolen from undeclared crude oil and LNG exports to global destinations; The investigative hearing on Centenary City Project; Pre- Shipment investigation, Amnesty programme and Several anti-corruption investigations have also been conducted by the 8th House of Representatives.”

Another area he said the legislature has deepened democracy is through representation, where the legislator, due to his or her close contact with constituents, get direct knowledge of their needs and petitions on their grievances and agitations.

The Speaker explained, “Representation is at the very heart of representative and constitutional democracy

“It is this democratic theory of representation that gave rise to what is now commonly known as Constituency or Zonal Intervention projects, which is now an entrenched policy deliberately crafted to ensure equitable representation of every constituency in the allocation and distribution of the resources of the nation.

“The rationale is that an elected member of parliament is closer to his people than unelected persons who hold sway in the budgetary processes and policy execution.

“The Representative role of the legislature includes providing democratic legitimacy for the government. The accessibility of the Legislature to the ordinary citizen helps to engender confidence in the system. Citizens who regard their government as legitimate are more likely to obey laws, support the regime and accommodate diverse points of view. Citizen participation in the legislative process is vital to creating this sense of legitimacy.”