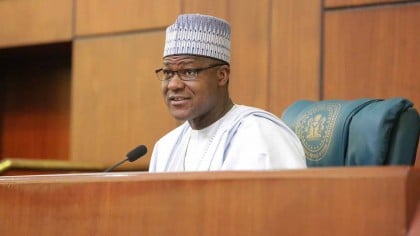 Speaker of the House of Representatives, Hon. Yakubu Dogara, has advocated for a permanent solution to the crisis of the Niger Delta region.
Dogara was represented by House Minority Leader Hon. Leo Ogor, said this  when he declared open an investigative hearing organised by the House of Representatives Committee on Public Procurement and Niger Delta Affairs on the alleged violation of public procurement Act/Abuses of the Amnesty Programme in Abuja. Also Read; What We Discussed With President Buhari During Visit – Speaker Dogara
The Speaker states that as representatives of the people, the House noted the urgent need to take necessary steps to solve the problems bedevilling the amnesty proggramme, and restore it to the ideals for which it was set up. Also Read; Speaker Yakubu Dogara Mourns Representative Sani Bello
“Let me use this opportunity to state that a more permanent solution which directly empowers the areas and stakeholders where oil and gas is produced should be instituted in order to achieve better fiscal, social and environmental equity,” he said.
“It is in this regard, that we welcome the recent announcement of the Hon Minister of State, Petroleum, of the unveiling of a 20-point agenda aimed at instituting permanent peace in the oil-producing region.”
“It is worthy of note that the activities of the militants cost, Nigeria, the giant of Africa to lose its position as the largest producer and exporter of oil in the African continent.”
The Speaker said observed that  efforts aimed at alleviating the plight of the Niger Delta and the ex- militants has been plagued with several challenges which include allegations of lack of transparency; fraud; diversion and mismanagement of Amnesty funds; refusal of Agencies to release funds for the effective running of the programme and in some instances outright corruption and impunity.
“These challenges have led to the renewed tension, agitation and militancy in the region since 2015. Indeed Nigeria lost about 3,000 MW of electricity to militancy activities in the Niger Delta, since then, according to Raji  Fashola, SAN, the Hon Minister of Works,  Power, and Housing.”
“We as a parliament, committed ourselves in our Legislative Agenda to support the Executive arm of government in its efforts to ensure transparency and strict adherence to mandatory Public Procurement processes as provided in our laws (Public Procurement Act 2007), and this cannot be compromised in its application to the Presidential Amnesty Program.”