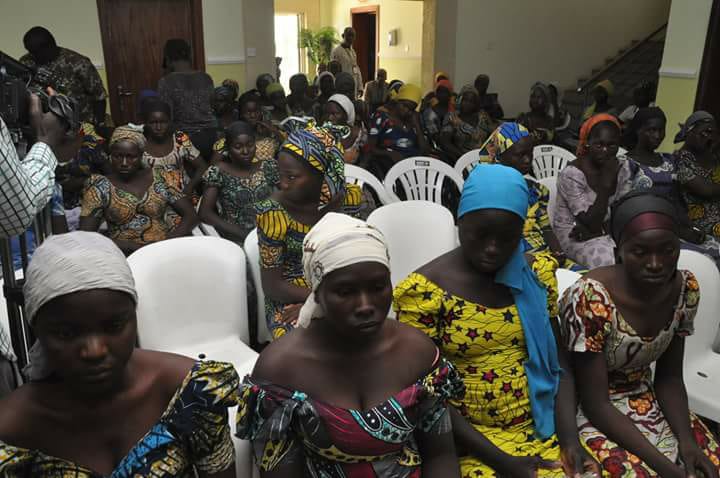 Cassidy Madueke, Abuja: The Buhari Media Support Group (BMSG) has taken a swipe at the opposition party, the PDP, for its disparaging comments on the swap strategy adopted in securing the release of the 82 Chibok girls, saying that the party has become insensitive.

The group in a statement today in Abuja, expressed displeasure at the comment of the party on grounds that the strategy would not promote insecurity in the country as claimed by the PDP.

The statement which was signed by BMSG Acting Coordinator, Hon. Austin Braimoh and its Secretary, Chief Cassidy Madueke observed that the “swap strategy has been used by the USA, Israel and other developed countries in exchange for their soldiers and that the strategy has almost become a norm globally.

“We are sure that the Federal Government must have done the needful to ensure that the Boko Haram operatives exchanged for the 82 girls will not pose any security threat to the nation,

“The position of the PDP is insensitive and uncalled for. No price is too high to get the over traumatized girls released from the den of dangerous terrorists who have no human feeling, coupled with international outcry that trailed their abduction since 2014,’’ the group said.

BMSG averred that it was very unfortunate that because it was other peoples’ daughters that were kidnapped, members of the opposition failed to see the sense in the strategy adopted by government to secure their release.

“Let us suppose that members of the opposition have daughters among those kidnapped, none of them will raise a finger on the price paid to release them. They would rather be rejoicing and thanking the government for living up to its promise.

“It is indeed good to remind the PDP that the government it presided over for 16 years foisted Armageddon on Nigeria in terms of phenomenal corruption, economic down turn and the ever-growing strength of terrorists. The Buhari’s government has been relentless in putting a stop to all these,’’ the statement said.

BMSG urged Nigerians to appreciate all efforts by the present government to correct the mistakes made by past administrations, adding that “President Buhari is giving the nation a new lease of life as evidenced by consistent economic growth, fight against corruption and terrorism’’.

The group described the release of the 82 Chibok girls as a major milestone of the President Muhammdu Buhari administration and a proof that better things will happen to Nigeria and Nigerians in the nearest future.

BMSG also said that so far, President Buhari has redeemed his repeated promises to get the girls out from Boko Haram captivity and reunite them with their families.

The group also expressed optimism that the remaining girls who are still in captivity will soon gain their freedom, as the release of the 82 girls gives the incline that the Federal Government has acquired the strategy for achieving such feat.

The group noted that the present government had performed creditably well in addressing the omissions by the immediate past government, which escalated the security challenges in Nigeria that culminated into the kidnap of 276 Chibok secondary school girls three years ago.

The group encouraged Nigerians to continue to trust and support the government of President Buhari based on the evidence that it has successfully tamed the menace of terrorism by consistently decimating the strength of Boko Haram and enthroning sanity into the Nigerian security system.