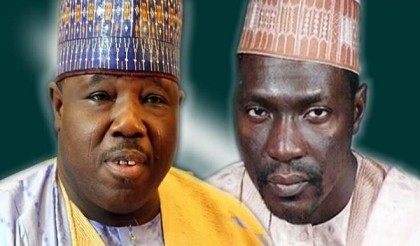 Sheriff and Makarfi At The Supreme Court

The Supreme Court on Monday struck out an struck out an application by National chairman of the Peoples Democratic Party (PDP), Ali Modu Sheriff, asking the court not to hear the appeal of Ahmed Makarfi, national caretaker of the party.

It could be recalled that Makarfi filed an appeal challenging the judgement of Appeal Court sitting in Portharcourt which sacked him as the national chairman of the party and confirmed Sheriff as the chairman.

However, Sheriff in his application asked the Supreme court not to hear Makarfi’s appeal because he could not initiate legal proceedings in the name of party, having being sacked by the appeal court.  A five-member panel led by the Chief Justice of Nigeria, Walter Onnoghen, said the application by Mr. Makarfi was considered valid since it complied with the rules of the Supreme Court.

After listening to both sides, In an unanimous judgement, justices Onnoghen, chief justice of Nigeria (CJN), allowed the appeal.

“In this circumstance, we find merit in the appeal which is accordingly granted,” Onnoghen said