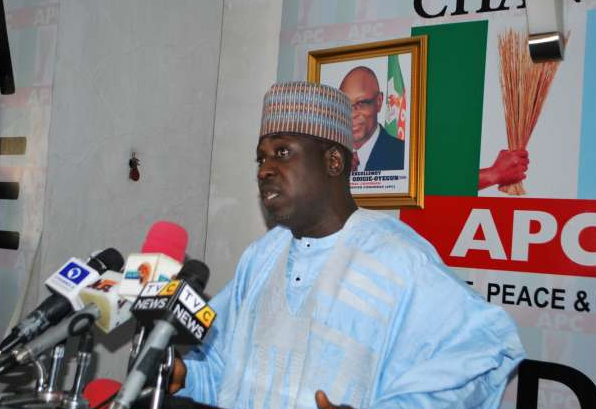 The ruling All Progressives Congress (APC) has commend the proactive and decisive action taken by northern governors and political leaders on the recent ultimatum and declaration by a so-called Arewa Youth Consultative Forum.

National Publicity Secretary of the Party, Mallam Bolaji Abdullahi said: “We are delighted to see that the pressures mounted by the various leaders have forced the group to reverse its misguided ultimatum and threats.

However, our party remain disturbed by the increasing spate of separatist agitations by individuals and groups in the country.

While we affirm the inalienable rights of citizens and groups to agitate for legitimate causes as a key ingredient of participatory democracy, we believe that such agitations should be guided by the extant laws of the country and established democratic norms.

They must be peaceful and demonstrate respect for the constitutional rights of other citizens who may not share in their separatist aspirations.”

Bolaji said the nature and content of recent agitations clearly transcends the boundaries of the law and exceeds the limits of freedom of speech and therefore, patently inimical to national cohesion and the sustenance of our hard-earned democracy.

“The National Assembly, the courts and several lawful avenues are available to citizens, groups and sundry interests to make change, seek redress and advance legitimate causes.

“Therefore, we call on agitators to either join a political party which shares their ideology or form a new party to push their cause.

“For emphasis, APC strongly condemns any utterance, ultimatum or actions that threaten the corporate existence of our country.” He said.

The spokesman said the Party is hopeful that various security agencies will investigate and prosecute promoters and sponsors of these provocative, divisive, inciting and undemocratic declarations and actions.

“We express our firm belief that despite our challenges, our strength as a country lies in the diversity of our peoples. This we must use to our advantage in our quest to lift the country to its deserved heights.

“We hereby call on political leaders in the South East to emulate their northern counterparts by reining in separatist agitators in the region and arresting the spate of provocative and inciting declarations and actions.

“This is the leadership responsibility imposed on them by the positions they occupy. We are disappointed to see that non-state actors could effectively subvert civil order in the face of duly constituted political authorities. Certainly, this unfortunate situation cannot be allowed to repeat itself.” He added