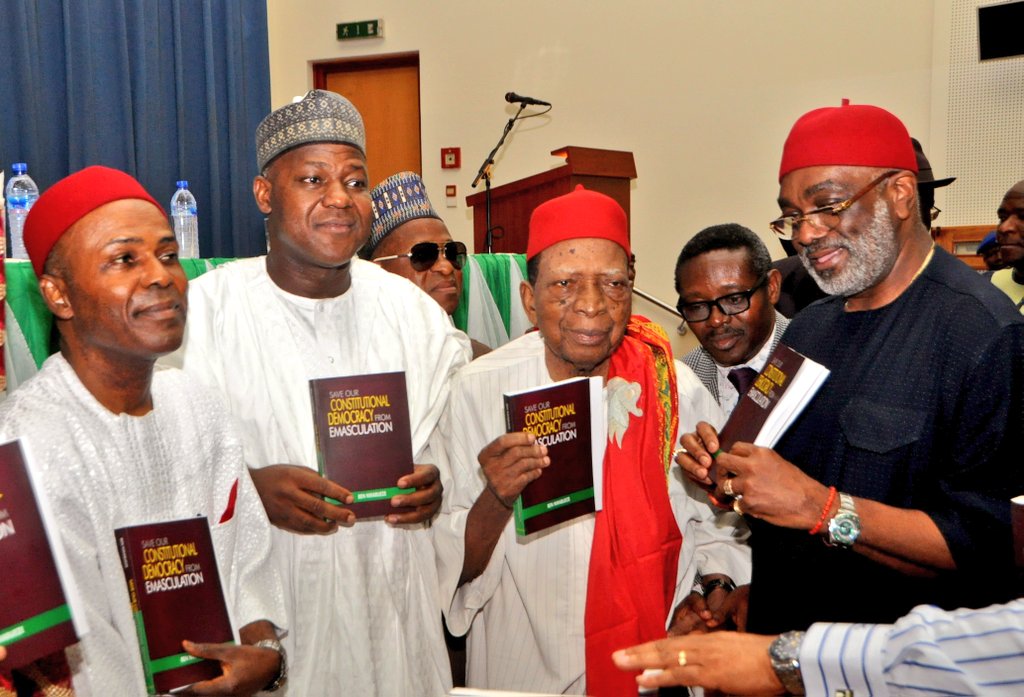 Prof Nwabueze Describes Dogara As Sign Of Hope In Nigeria

Eminent jurist and constitutional lawyer, Professor Ben Nwabueze, has showered encomiums on Speaker of the House of Representatives, Yakubu Dogara, describing him as an impressive leader and a great hope for leadership in Nigeria.

Speaking at the public presentation of his new book titled “Save Our Constitutional Democracy From Emasculation’, in Abuja, Professor Nwabueze, said that each time he sees and listens to the Speaker presiding in the House, it gives him hope that all is not lost in Nigeria.

“Having listened to your speeches, comments and the way you preside over the House, I am very impressed. It gives me hope that all is not lost in Nigeria. We still have people who can be entrusted with the affairs of Nigeria”, Prof Nwabueze said.

On his part, Speaker Dogara, noted that for democracy to succeed in Nigeria, politicians, players and stakeholders must study the Constitution of the Federal Republic of Nigeria to understand the limits of their powers.

The Speaker argued that governance in Nigeria will be more effective when every player in the three arms of government are clear on what powers the Constitution grants to their offices and where those powers end.

“To be candid, majority of us do not even know what constitutional democracy means or entails. Some of us in the system have not even studied the Constitution,” the Speaker stated.

Apparently alluding to the ongoing debate over the power of the legislature to input projects in the Appropriation Bill, Speaker Dogara said that there should be proper understanding of the provisions of the Constitution, which was drafted along the lines of that of the United States.

Stressing that the concept of limited government and limited powers must be understood by all the arms of government.

“We come to Nigeria, where, for instance, the executive, or the President determines the priority of the nation or of his government but parliament can say no as representatives of the people,

Dogara continued, “And we have seen some of these contradictions played out in a country like the United States. We borrowed almost everything in our Constitution from the United States but there, the President ran for election on the premise that he was going to build a wall, it was one of his cardinal promises.

“As a matter of fact it was one of the basis for which he had appeal. On the Healthcare bill introduced in Congress, most members said, well, that may be the priority of your government but we don’t think that is the priority of our people, and it stalled.

“If it were in Nigeria, imagine the kind of discussion it would have generated such as parliament is frustrating the President, they don’t want him to succeed and so on and so forth.”

Dogara commented on one of the main issues in the book, the Amaechi case and described it as a situation where the judiciary elected a Governor who did not participate in the elections.

He posed the question, ” Who can save our constitutional democracy from emasculation. Is it the Executive or Legislature or the Judiciary?”

He urged people to read the book, ‘Save Our Constitutional Democracy From Emasculation’, to understand constitutional roles each arm of government has to play in a constitutional democracy.
In answering Speaker Dogara’s question, the renowned jurist, Prof Ben Nwabueze, stressed that the National Assembly is the only institution that can save constitutional democracy from emasculation in Nigeria, adding that due to the tendency of the Supreme Court to have ‘special interests’, the Judiciary can no longer be trusted with that role.

He urged the National Assembly to tighten the loopholes exploited by the Supreme Court to disregard section 141 of the Electoral Act that sought to remedy the decision in Amaechi’s case.