Ekiti State Governor, Mr Ayo Fayose, said he would have burnt his Peoples Democratic Party (PDP) membership card if the court had declared Ali Modu Sheriff chairman of the party. 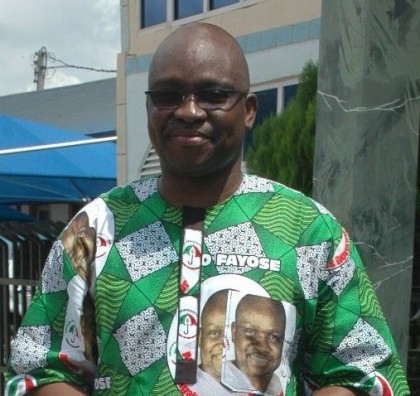 He said that he would have also destroyed the party’s flag in his possession.

Fayose, who returned to the state on Friday after the Wednesday’s Supreme Court session, stated this while addressing PDP supporters in Ado-Ekiti.

He said that he would have destroyed his membership card of the party and the flag right at the court premises if the verdict had been in favour of Sheriff.

“I never imagined myself being in the same party with impostors” he said.

The governor, however, said that Sheriff and his followers had been forgiven but won’t go scot-free for causing the party members so much pain.

“I went to court with a perfume which I wanted to use to spray my cards and party flags and set them ablaze even within the court premises if Sheriff had won; that was why I went to court.

“Although I believe that we remain the same PDP family, no one can cause our party such pains and embarrassment and expect that he will go without being asked to account for his actions.

“The `no victor, no vanquished’ that we said was a mere political slogan. Whoever that participated in this charade must show some reasonable level of remorse for his actions,” he said. (NAN)