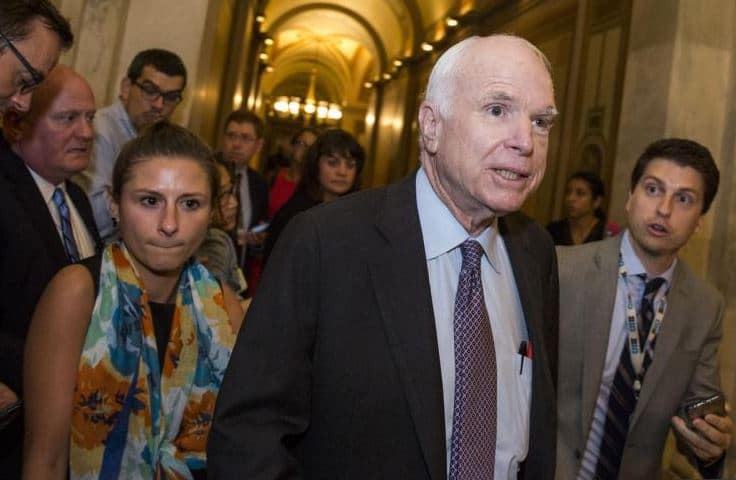 Senator John McCain’s ‘no’ vote ensured that the majority Republican Congress failed to repeal the Obamacare as legislators voted in the floor of the Senate.

In a stinging blow to President Donald Trump, U.S. Senate Republicans failed on Friday to dismantle Obamacare, falling short on a major campaign promise and perhaps ending a seven-year quest by their party to gut the healthcare law.

Voting in the early hours, three Republican senators, John McCain, Susan Collins and Lisa Murkowski, crossed party lines to join Democrats in a dramatic 49-to-51 vote to reject a “skinny repeal” bill that would have killed some parts of Obamacare.

“This is clearly a disappointing moment,” Senate Republican leader Mitch McConnell said on an eerily quiet Senate floor right after the vote. “The American people are going to regret that we couldn’t find a better way forward.”

Trump’s failure sent the dollar down against a basket of other currencies on Friday.

The setback leaves him without a major legislative win after more than six months in power, despite Republicans controlling the White House, Senate and House. He had been expected to make rapid changes to healthcare, taxes and infrastructure spending.

“3 Republicans and 48 Democrats let the American people down. As I said from the beginning, let Obamacare implode, then deal. Watch!” Trump tweeted after the vote.

The voting down of the bill still leaves uncertainty in the healthcare industry, with insurers not sure how long the Trump administration will continue to make billions of dollars in Obamacare payments that help cover out-of-pocket medical expenses for low-income Americans.

After speaking to Pence and Graham, McCain walked across the Senate floor to tell Senate Minority Leader Chuck Schumer and other Democrats that he would vote with them. They laughed as McCain said that the reporters in the balcony could probably read his lips. Democratic Senator Dianne Feinstein embraced him.

When McCain walked to the front of the Senate chamber to cast his deciding “no” vote, giving a thumbs down, Democrats cheered, knowing the bill would fail.

After the bill’s defeat, Schumer told the Senate that it was time to heed McCain’s call this week to return to a more transparent and bipartisan legislative process.