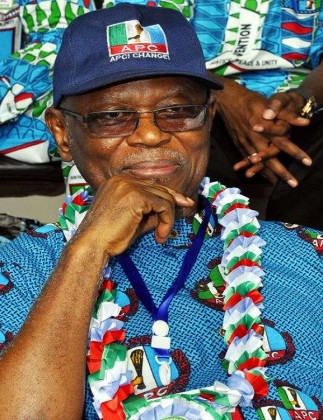 The National Chairman of the All Progressives Congress (APC), Chief John Odigie-Oyegun on Monday inaugurated a seven-member reconciliation committee for the Party’s Kogi State Chapter at the APC National Secretariat in Abuja. After the meeting, journalists who covered the event interviewed the APC National Chairman on Saturday’s return of President Muhammadu Buhari from the United Kingdom and the President’s Monday morning broadcast to Nigerians.

Below are excerpts of the interview.

Q. On the President’s return from the United Kingdom

I am very very elated that he has come back. He has not only come back, he has come back very strong and he has come back to the very warm adulation, spontaneous reception by the ordinary people of this country. I was very glad and I think I will repeat what I had said earlier that it is a clear indication that the ordinary Nigerian is more discerning and knowledgeable than perhaps we give him credit for. That inspite of all the vile and vicious propaganda, he knew, his heart, soul was always in empathy with our President. Thank God, he has been healed, he is back to continue from where he left off. Happily, the Vice President did a yeoman’s job in his absence. But two is a team, one is one. So the team is now back in full fighting force.

Q. On the President’s Monday morning broadcast to Nigerians

The speech was absolutely outstanding. You see, he is the President of this nation. He has been away for quite a bit of time. Agents of destabilisation have been very much at work because they thought his absence created a gap and a weakness within the polity which they tried to exploit. So Mr. President in his wisdom discerned that the stability, unity, peace and security of this nation and the ordinary Nigerian are the key issues at this material time. He addressed them and went straight to the core of the issues. He left nobody in any doubt that any Nigerian is entitled as a matter of right to live, work and operate in any part of this country. He made it clear and left no one in any doubt that yes, while people can discuss issues and the relationship in the nation, the National Assembly is there to handle such issues. But he drew one red line that the only thing that is not on the table is that this nation can be divided. He made it clear that the unity of the Nigerian nation is not up for negotiation of any type.

Mr. President picked on the core issue that was creating a lot of disquiet in the nation today and he made his views crisp and clear. Any leader must be able to set priorities. He set a very clear and unambiguous priority. The others he will deal with in the course of time.

Q. On the issue of restructuring

He said quite clearly that you can discuss. The only issue that is out of bounds is the unity of this nation. That as the situation is today, the institutions of state that can legitimately deal with any changes in the relativity within the nation is the National Assembly and the National Council of State. It is the National Assembly that makes laws. So the situation is so clear and unambiguous. He did not say you can’t discuss but the only issue that was not on the table is the unity of the Nigerian nation.