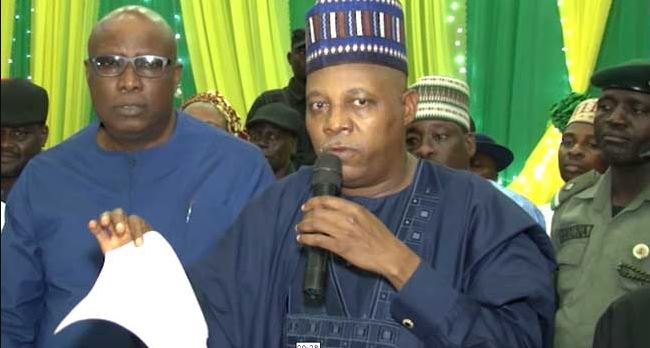 Isa Gusau, Abuja: A Committee which conducted the All Progressives Congress (APC) Governorship primaries in Anambra State has submitted its report to the party’s National Working Committee with a conclusion by members of the committee, led by Governor of Borno State, Kashim Shettima, that none of the 12 contestants who took part in the elections raised any questions on the integrity of all processes before, during and after the August 26 primaries which held in Awka, capital of Anambra State.

Governor Shettima, in company of the Committee’s Secretary, Navy Commander Giwa Daramola (Rtd) and three members, Engineer Muazu Magaji , Dr. Ray Murphy and Alhaji Mustapha Mayana presented the report to the National Organizing Secretary of the APC, Osita Izunaso at the residence of the Party’s chairman, Chief Odigie-Oyegun in Abuja on Sunday with chairman awaiting to be passed the report.

The committee notes with satisfaction that all delegates were duly accredited and conveyed to voting venue in the presence of agents of all aspirants and none of the agents raised questions about the integrity of the process before and during the election.

The committee notes with satisfaction that none of the aspirants questioned procedures of voting,sorting, collation and counting of results before, during and after the election.

The committee notes with satisfaction that security agencies provided adequate personnel that guaranteed the integrity of the entire process and that none of aspirants raised questions concerning the integrity of any security personnel.

The committee notes with satisfaction that chairman of the election appeal panel , former Minister of Works, Dr Hassan Lawal was in Awka with the committee and he observed all election processes. Presidential Adviser to the President Baba Femi Ojudu was also in Awka to observe the election at the instance of the National Secretariat and he has prepared his report.

The committee also notes that the Independent National Election Commission (INEC) observed conduct of the election in compliance with electoral laws. Most importantly, the committee notes with satisfaction that the Election held peacefully with none of the aspirants raising any complaints before the committee in relation to the integrity of all processes of the election” the Governor read from the conclusion of the report.

Receiving the report, the APC National Organizing Secretary, Senator Osita Izunaso commended the Governor and members of his ‎committee for what he described as a ‘good job’ promising to table the report before the National Working Committee of the party. He thanked the Governor for accepting what he called “a difficult national assessment that most people tend to avoid”.

The Governor and members of his committee later held a closed door session with members of the National Working Committee with the National Chairman of the Party in attendance.”