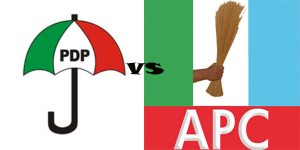 Isa Gusau, Maiduguri: Borno State Chairman of the All Progressives Congress, APC, Ali Bukar Dalori has called on PDP National Publicity Secretary, Kola Ologbondiyan to wear the thinking cap of a journalist and stop being fooled around by a Borno faction of PDP whose members have been spreading mischievous allegations that the State PDP secretariat in Maiduguri was demolished.

Dalori was speaking in response to media reports claiming Mr Kola announced that the PDP intends to sue the Governor of Borno State, Kashim Shettima over alleged demolition of the party’s secretariat.

“It is a shame that someone with the background of being a senior journalist didn’t find it worthy to establish facts before rushing to address the press. He ought to know that some officials of the PDP in Borno State themselves have since confirmed that their party’s secretariat wasn’t demolished as claimed. Perhaps, because the publicity secretary is new and in a hurry to show he can talk, he didn’t even have the patience to find out the actual location of the PDP’s state secretariat in Maiduguri. If he did, he should have known that for over 15 years the Secretariat has been located at Wulari near the UTC and nothing has happened to it.

Also because he is new, he doesn’t know that the PDP in Borno State has two factions with one trying to use him in a manner he will be embarrassed.

The publicity secretary will be humiliated if he goes to court because he will come to see glaring evidence that first, the PDP secretariat wasn’t demolished and secondly, the building demolished was the old Premier Cinema which had actually served as headquarters of Buhari Youths Organization since 2011 before it was abandoned, then acquired by the APC led Government from its owners for the purpose of conversion to public use. That building isn’t the first nor will it be the last to be acquired for public use with all compensation being regularly paid. The APC Government has acquired many private and public property including a magnificent CBN staff quarters which is being remodeled to a boarding primary and junior secondary school to admit about 5,000 child-victims of Boko Haram.

The Government is building public facilities, particularly schools to cater for over 50,000 children who have been turned orphans by Boko Haram. The fact is that these so called PDP factional members are frustrated by the overwhelming performance of the APC led administration in Borno State and this is why they came up with this confusion in order to derail the administration.

They have failed. The APC administration will be more than happy to meet the PDP in court. Meanwhile, Mr Kola is advised to take a break and study politics, particularly the type in his party before he gets really messed up” Dalori said.

Sanda​, ​who represented Maiduguri Metropolitan Council as member of the State PDP caretaker committee before the party became factionalized, ​also released photo of the PDP secretariat.

​He said the the clarification became necessary in view of misleading reports capable of destabilizing the peace in Maiduguri.

​Sanda in a statement said: ​”I have been receiving calls from some of our PDP members in local government areas within Borno State, and some members outside the State, asking me whether it was true that the PDP state secretariat in Maiduguri has been demolished.

​”​As early as 7am, I rushed to our State secretariat located in Wukari, off Sir Kashim Ibrahim way, around the old UTC which everyone knows to be our State headquarters in Maiduguri within the last fifteen years and saw it intact.

​”​In fact, I took pictures of the headquarters for anyone to see. To the best of our knowledge, no PDP building has been demolished by anyone, not even any land was revoked. We do not know about the existence of any other PDP State secretariat apart from the one everyone knows around the UTC.

​”​If the PDP State secretariat was actually demolished, I don’t think there would have been peace in Borno today because no one would expect silence from millions of our youth supporters in Borno, and our strong leaders that include former Governors, former Ministers, former Senators and House of Representatives, former chief executives of Federal Boards, Agencies.

​”​A so​-​called PDP chieftain that was quoted as have said our State secretariat was demolished is not even known to those of us that have been in PDP since the party was formed. The fact is that some people have entered into our party and created factions just to create confusion.

​”​We have been in court and the court has given an order restraining any group from claiming leadership of the PDP. It is therefore impossible for discussions as sensitive as changing the State Secretariat of the PDP to have taken place when the contention on the leadership of the PDP in Borno State is yet to be resolved.

​”​Members of the public are strongly advised to disregard that mischievous information. For the purpose of emphasis, no PDP secretariat was demolished in Borno State.

​”​The story is is totally false, misleading and mischievous. The aim is to cause disaffection, pretend to be in control of leadership of the PDP and w​hip up political sentiments across the country which would ultimately destabilize emerging peace in Borno State.

​
Two photographs here attached, show the now demolished cinema which used to serve as Buhari Youths Organization headquarters, and the PDP secretariat located at Wulari near the UTC in Maiduguri, which is still standing.