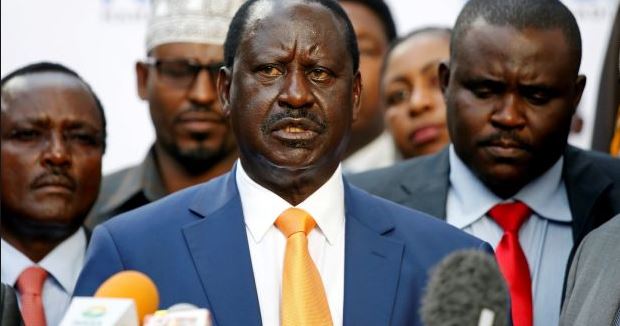 Interior Minister, Fred Matiangi, in a gazette notice has declared the movement an organised criminal group.

The minister confirmed the authenticity of an official notice sent to several media houses saying the movement – a loosely organised coalition of opposition lawmakers – had been declared illegal.

According to Kenyan law, being a member of an organised criminal group can lead to imprisonment for a term not exceeding 10 years, a fine of more than 5 000 dollars or both.

Property of members of organised criminal groups can be seized.

Kenya’s government had warned that Tuesday’s mock inauguration of opposition leader, Raila Odinga as “the people’s president” after months of election turmoil would be considered treason.

Kenyan authorities shut television and radio stations on Tuesday as supporters of opposition Odinga watched him take a symbolic presidential oath on the Bible in a Nairobi park in a direct challenge to President Uhuru Kenyatta.

So far, the movement’s major achievement has been leading a largely-ignored boycott of some products whose owners it says are aligned with government interests.

Odinga’s supporters say he is Kenya’s legitimate leader and Kenyatta’s election was neither free nor fair.

Kenyatta’s victory in August was annulled by the Supreme Court over irregularities, but he then won a re-run, which Odinga boycotted over a failure to revamp the electoral commission.

Kenyatta was sworn in for a second term in November and state institutions report to him.

“I, Raila Omolo Odinga, do swear that I will protect the nation as people’s president, so help me God,” Odinga said to the cheers of more than 15,000 people in Uhuru Park, next to Nairobi’s main business district.

During a speech lasting less than five minutes, Odinga declined to give details of his plans and said they would be disclosed in “due course”.

In a possible sign of division within the opposition alliance, Odinga’s vice presidential candidate and two other senior leaders were absent.

Odinga said the vice president would be sworn in at a later date.

The attorney-general had warned that Odinga could be charged with treason if the event went ahead – an offense that can carry the death penalty.