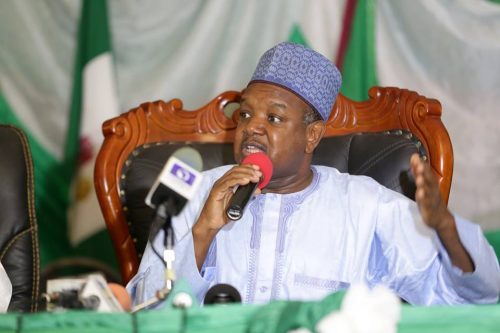 Maikyau argued extensively in urging the court not to admit in evidence, some of the documents the plaintiffs sought to tender in the defence of their case.

He said that some of the documents such as; the USA District Court of Columbia document titled Verified Complaint, the Memorandum of Opinion and a receipt sought to be tendered did not meet the required standards stipulated by the law.

“My lord the three criteria for a document to be admissible are that the document must be pleaded, it must be relevant and must satisfy any requirement of the law for its admissibility.

“The document, sought to be tendered, purports to be the proceeding of a court in the USA.

“That document is a copy of the purported proceedings.

“Under Section 102(a) (iii) of the Evidence Act, it is a public document. This is not the original copy.

“Section 106 Paragraph H of the Act described the manner of proof in documentary evidence of this nature.

More so, he contended that the document was not certified, saying it did not satisfy requirements of the Evidence Act, insisting it was generated electronically.

Justice Mohammed adjourned the matter until Feb. 6, for the plaintiffs to respond to the defendant’s objection to admissibility of the documents.

Other plaintiffs in the suit include, Maj. -Gen. Bello Sarkin Yaki (rtd) and Mr Anthony Itanyi.

Sarkin Yaki, who was the PDP governorship candidate in the 2015 election, asked the court to cancel the Certificate of Return issued to Bagudu and declare it as null and void.

He was equally seeking an order of court directing the Independent National Electoral Commission (INEC), to issue him with a fresh Certificate of Return for coming second in the said election.

The plaintiffs, in the suit, prayed the court to declare that Bagudu was incompetent to contest the last governorship election in Kebbi.

They urged the court to sack the governor on the premise that he gave false information in the Affidavit of Personal Particulars he submitted to INEC prior to the 2015 governorship election in the state.

The plaintiffs told the court that the claim by Bagudu in his Form CF.001 before INEC, to the effect that he was not under a fine for offence of “involving in dishonesty or fraud or any offence imposed by a court or tribunal”, was false.

They alleged that contrary to Bagudu’s claim it was discovered that he was previously fined by a court in the U.S.

They further alleged that he was arrested on May 22, 2003, in Houston, Texas, U.S.  based on an extradition warrant that was requested by Britain on behalf of Isle of Jersey.

That he sold the notes back to the Federal Government for twice the purchase price.

According to them, while their case was pending before the high court, INEC conducted the gubernatorial election and declared Bagudu as the winner. (NAN)