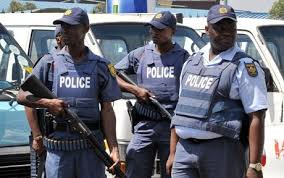 The state broadcaster did not provide details of the two detainees.

Plice raided the family home of businessmen friends of President Jacob Zuma on Wednesday amid a probe into allegations that the family used their links with the president to win state contracts and influence Cabinet appointments.

The raid by the specialist Hawks police unit on the family home of the Guptas came a day after the ruling African National Congress (ANC) ordered Zuma to step down as head of state after nine years in office dogged by scandal and a stagnant economy.

A dozen heavily armed tactical police blocked off a street leading to the Gupta home in Johannesburg. A police officer told Reuters: “This is a crime scene.”

Zuma and the Guptas, a family of wealthy Indian-born businessmen, deny any wrongdoing.

The Hawks spokesman Hangwani Mulaudzi was not immediately available for comment, but the state broadcaster quoted him as saying the police were there as part of a raid.

The Guptas are accused by the anti-graft watchdog of using the friendship with Zuma to amass wealth. Both deny any wrong doing. (Reuters/NAN)