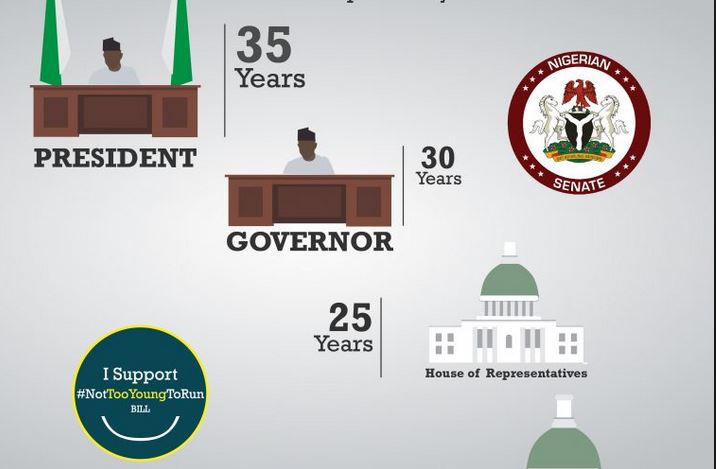 The Not-Too-Young-to-Run Movement on Friday in Abuja gave the executive and legislative arms of government at the federal and state levels an ultimatum on the passage of the Not-Too-Young-To-Run bill.

Mr Samson Itodo, one of the conveners of the group, while briefing newsmen said the movement was giving all the concerned bodies 30 days to conclude the ongoing Constitutional amendment processes.

“This is necessary in the interest of democracy so that the youths will not lose out in the 2019 elections.

“Our movement is determined to vigorously mobilise young people to participate actively in the electoral process in the build-up to the 2019 elections as candidates and voters,’’ he said.

Itodo said the need to eliminate inequality in the electoral process and embrace youth participation was what necessitated the advocacy for the passage of the bill.

“We urge the state assemblies to without further delay transmit the amendments to the National Assembly.

“We also call on the National Assembly to transmit the Constitutional amendments to President Muhammadu Buhari for assent as soon as the bills were received from the state assemblies.

“With the passage of the Not-Too-Young-To-Run bill, we expect that more youths will seek political offices.

“We therefore call on political parties to uphold the principles of internal democracy, transparency and accountability.

“The parties should provide a platform for the actualisation of political aspirations, since we have also noted that parties can undermine and jeopardise youth candidacy at elections.

“It is therefore important to reiterate the need for political parties to ensure internal party democracy to safeguard the emergence of youth candidates in the 2019 elections.’’

“But, should the President delay it or decline assent to the bill, our group will urge the National Assembly to veto the President,’’ he said.

Itodo said that it was in furtherance of the group’s goal that the movement has declared March 14 a National Day of Action for Presidential Assent.

He urged all citizens, especially youths, to prepare to march to the Presidential Villa to constructively engage with the President on his assent to the Not-Too-Young-To-Run bill.

Ms Bella Ndubuisi, also a convener of the group, said the Age Reduction bill had received affirmative votes from 25 state assemblies as at Thursday.

“As at yesterday, the 25 states had passed the bill seeking the reduction of the age for running for elective office in Nigeria.

“With the passage, the bill has met the Constitutional threshold prescribed by Section 9 (2) of the 1999 Constitution of the Federal Republic of Nigeria (as amended).

“This Section stipulates that any amendment to the Constitution should be approved by at least 24 state Houses of Assembly.

“The passage of the bill by the states is historic and unprecedented. This will no doubt enhance the quality of Nigeria’s democracy.

“This is a practical step towards harnessing the demographic dividend,’’ she said.