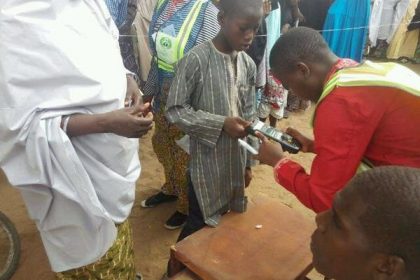 In a statement by its National Publicity Secretary, Mr Kola Ologbondiyan, on Sunday in Abuja, the PDP said the panel lacked credibility as it comprised officials of INEC, which had been accused of complicity in the issue.

It said that the panel had been detailed to arrive at pre-determined findings and recommendations to exonerate the commission and play down on the electoral implications of the existence of under-age voters.

The party said that the scope of the inquest, particularly the exclusion of Katsina State from the probe in spite of vast evidence of under-age voters in that state, was not acceptable.

It alleged that the fact that the All Progressives Congress (APC) rose in staunch defence of INEC over the existence of minors as voters further confirmed that the ruling party had more than vested interests in the illegality.

“Nigerians have been wondering why INEC is afraid of looking at its register in Katsina state.

“Is it because Katsina is the home state of
President Muhammadu Buhari and a probe is likely to expose cans of worms?

“Is INEC afraid that a sanitised register would lead to a massive drop in the voting population in the state and cripple APC’s rigging plan?

“Nigerians are also wondering why INEC has vehemently refused to include other stakeholders, including political parties, credible NGOs and Civil Society Organisations in this important assignment to guarantee its
credibility,” it stated.

The party alleged that by excluding other stakeholders, INEC was definitely not sincere with the sanitisation of the voter register in Kano, Katsina and other states.

“INEC, under Prof. Mahmood Yakubu is already manifesting weaknesses and bias, which further confirms why it should not be trusted in the conduct of the 2019 general elections.

“Consequently, the PDP and all aligning stakeholders will not accept any findings or recommendations from INEC’s in-house committee as such will not reflect the reality on the ground regarding the contaminated register,’’ it added.

The party insisted that INEC must be bold enough to extend the inquest to Katsina state as well as other states where minors were registered.

According to it, failure by the commission to do so implies that it has already caved in to pressure ahead of the 2019 elections.

The PDP charged the INEC chairman to quickly redeem the image of the commission by immediately disbanding the flawed committee.

It advised the commission to set up a more credible and transparent panel made up of political parties, credible NGOs and CSOs, and extend the inquest to Katsina and other states.

It said Nigerians would not accept anything short of a credible, free and fair general elections in 2019, adding that any attempt by anyone to subvert the will of the people would have himself to blame.

Meanwhile, the PDP has urged the Federal Government to provide answers to urgent questions surrounding the abduction of schoolgirls in Dapchi, Yobe.

It said in a statement by its National Publicity Secretary, Mr Kola Ologbondiyan, on Sunday in Abuja, that the Presidency needed to react to the allegation that security was compromised around the school.

The party said that the Federal Government should account for all the misleading reports that frustrated the immediate rescue of the girls.

“Nigerians have been in shock over revelations by the Yobe Governor, Alhaji Ibrahim Gaidam, that the abduction was preceded by withdrawal of troops around Dapchi, thereby paving the way for insurgents to attack and abduct the girls.”