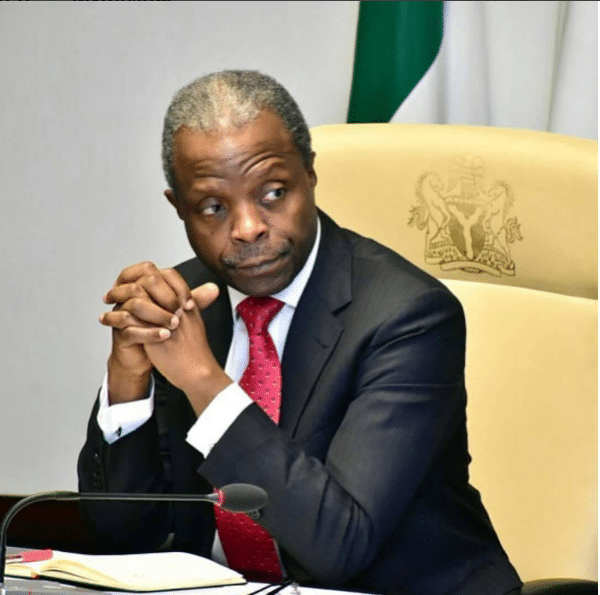 Part of a media interview granted by Vice President Yemi Osinbajo to a group of journalists and social media practitioners in Lagos state, on Friday, 2 March 2018. In the interview, Osinbajo says the government has kept its promises to Niger Delta Nigerians.

We are also looking at how healthcare insurance can improve it.

Q: The state of primary health care in the country.

Vice President: Of course, our health system has long suffered. That is one of the chief concerns that we have been focusing on; getting the diaspora to work with us to improve our health system. We are also looking at how healthcare insurance can improve it. I agree that if all of us put our resources and our time in local medical care, we will improve it. I have no doubt in my mind that our local healthcare system is what most of us subscribe to at least, and our doctors are some of the best in the world. But that’s one of our commitments to make it work.

Q: Crude oil as the main driver of the economy, and FG dialogue with groups in the Niger Delta region.

Vice President: I don’t know when Chief Clark made that statement. I think that, by and large, all of what I’m saying is being done. It is obvious for everyone to see. I’ve no real problem demonstrating this, but as a matter of fact, if you look on our website (www.ndnewvision.gov.ng), on the all of the Niger Delta issues, we have almost a blow-by-blow account of what we are doing, including the Ogoni cleanup.

I think there is a lot going on. You can’t address all of the problems at once. We have provided plenty of information. We have Inter-ministerial meetings where the different stakeholders meet constantly with leaders of the Niger Delta. I think you can imagine development is something that no one can be completely satisfied with at any point in time; that’s why it’s called development.

Q: Success of the Ease of Doing Business reform, visa reforms, and FG plans to attract more foreigners to contribute to the country’s economic growth.

Vice President: I think it was for those people that we designed our visa-on-arrival policy. It is for people who are bringing in their resources and money.

Q: Does this special visa apply only to poor countries, especially those low on human development index?

Vice President: Not necessary. Let me explain what we are trying to do with visa-on-arrival: you apply online so you get a visa, and this is where we are issuing the I-Step so that there is passenger information ahead of your arriving in Nigeria. That is one of the infrastructures we are putting at the airport now. You arrive at our port, we can give you a visa right there; that is what Singapore and other countries do, irrespective of where you are coming from you can get the visa there. When you arrive in Nigeria we have advance passengers information, even the visa-on-arrival that’s where we are heading. The most important thing is that there is a record.

Ariaria market today is possibly the largest MSME hub in the whole of West Africa. The Federal Government, with the private sector, is powering Ariaria market so that every one of the 21,000 shops in Ariaria market has power. The roads to the market are in the budget.

Ariaria market today is possibly the largest MSME hub in the whole of West Africa. The Federal Government, with the private sector, is powering Ariaria market so that every one of the 21,000 shops in Ariaria market has power. The roads to the market are in the budget. Let’s bring it down to what we are doing; the first of our MSME clinics was in Aba and we are committed to ensuring Aba is a hub that it ought to be.

This is where we spend a lot of time and energy to move regulatory agencies so that they actually have a one-stop centre there, so that NAFDAC, SON can move into that place. There is a lot of work that’s going on. The truth is that we do what needs to be done. We were elected to do the right thing by everyone and we are doing it. I’ve gone to the South East several times. I’ve visited Nnewi and many parts of Anambra as well, where we look around and look at ways of supporting industries there and we are still committed to that zone.

For me: I think we could have done far more in terms of jobs, direct jobs now because we’ve done enough.

Q: Areas that FG could have done better.

Vice President: Let me say that one of the very important things for me, I think we could have done far more in terms of jobs, direct jobs now because we’ve done enough. We first created jobs in agriculture. Perhaps we are hoping we would be able to provide by now 500,000 of our N-power jobs, but because of the income, we are able to provide 200,000. We have another 300,000 waiting to be employed. So maybe a year into our government, we could have done 500,000. So for me, I think if we have the kind of resources that people had 10 years ago when oil was $115 per barrel we could have provided far in excess.

I also think that perhaps in the area of power, especially trying to do much more, but power is privatized. A lot of the power companies, a lot of the GENCOs, the DISCOs in particular, simply don’t have the resources to replace assets, so they slow down. How I wish they have more funds to pump into assets and we hope they have more resources to do so. We’ve put in place the over N700 billion payment assurance scheme, but that is insufficient.

the President does not call the EFCC and say, “Go and arrest Mr Ekpeyong”, no. And that’s one of the most important things about the style of this government, and we want the agencies to do their work.

Q: DSS disagreement with the NIA in the past, the recommendation of EFCC Chair, Ibrahim Magu, by the President and DSS’ letter against that; these point to discord within the administration

Vice President: That’s not true. Let me put it this way; first, let’s take the Magu example. One of the things that the President decided to do is to ensure that every agency does its work without direct interference from the President. So the President does not call the EFCC and say, “Go and arrest Mr Ekpeyong”, no. And that’s one of the most important things about the style of this government, and we want the agencies to do their work. No one has shown up and called Magu and say, “Look go and arrest.” That’s what it is.

While you will find, for example, that the DG, SSS, upon the request by the Senate, wrote a security report and sent it, yet it is up to the President to decide whether he’s going to present this candidate. Interfering with the process of a security report is not leadership, that’s obstructing. He is not supposed to interfere. If you say, “Send your report”, whatever report you want to send, the man defends himself, and we still believe he is the right person for the job. That is the position that we took when he was presented the second time.

Of course, the Senate has had their own say on that and they are entitled to take some of the positions they are taking. But the President believes that this is the right man for the job, so he presented him the second time.

To ensure that you allow government agency do their business, that’s very important; that’s institution building. Look at what is happening in the US today; the President is sometimes angry with the FBI because the FBI is doing its independent work, and that’s what we hope to achieve:

Vice President: With respect to the arrest of DG, NIA, and some of what took place, I think the fair thing to say is that the President has said that the EFCC has the absolute right to go ahead and do whatever it needs to do to ensure that anybody who has committed a crime, or who is suspected to have committed a crime, is brought to justice, and that’s the position that the EFCC has taken. You know the EFCC has issued a notice for the DG, NIA, and SGF to attend an interview with the EFCC; but we are sure that that process would be followed to a logical conclusion.

To ensure that you allow government agency do their business, that’s very important; that’s institution building. Look at what is happening in the US today; the President is sometimes angry with the FBI because the FBI is doing its independent work, and that’s what we hope to achieve: when you see countries where agencies are doing their work the way they are supposed to do it.