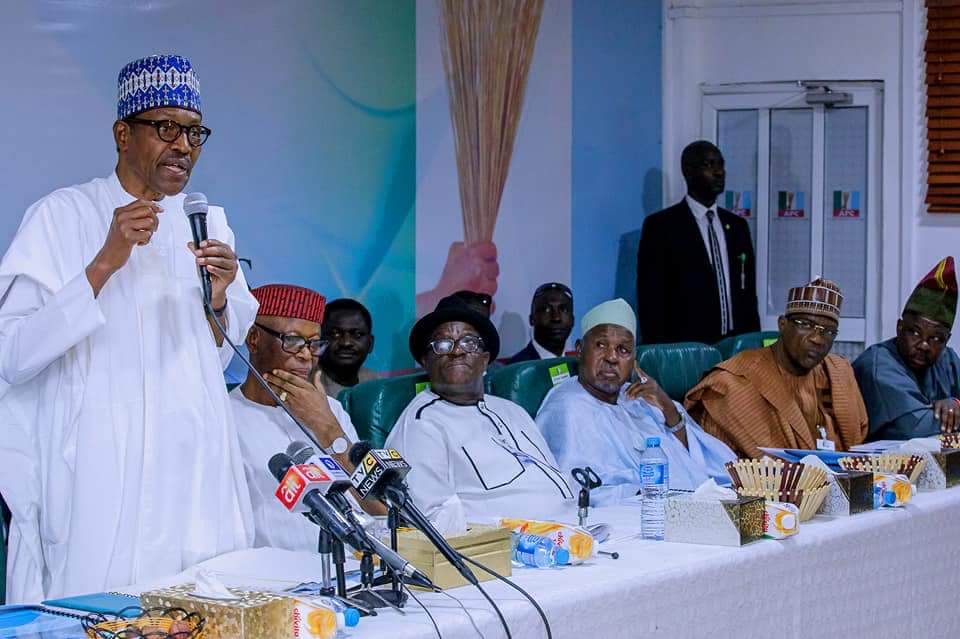 I am delighted to once again welcome you to this National Executive Committee Meeting of our great party. As we usually do, I hope we will take the opportunity of this gathering to resolve outstanding issues and consolidate our plans towards making APC the strongest defender of the interests of our people.

​In particular, I think it is important for me to speak quickly on the contentious issue of the tenure of our National and State Executive Officers. As we all know, a motion was moved at the last National Executive Committee meeting of February 27, 2018, to the effect that when the tenure of the current executives expire in June this year, they should be allowed to continue for one year.

This motion was duly carried by a majority of members present at the last NEC Meeting, even though some of our party members have since spoken up very vehemently against it. Others have even taken the matter to court.

On my own part, I have taken some time to review and seek advise on the resolution. And what I found is that it contravenes both our party Constitution and the Constitution of the Federal Republic of Nigeria.

While the APC Constitution, in Article 17(1) and 13.2(B), limits the tenure of elected officers to four years, renewable once by another election, the 1999 Constitution of Nigeria (as amended), in section 223, also prescribes periodic elections for party executives at regular intervals, which must not exceed four years.

Furthermore, Article 31 of our Party Constitution provides that any principal officer wishing to re-contest or contest for another post, must resign from his current post at least one month before the election

​In this circumstance, what is expected of us is to conduct fresh elections, once the tenure of the current executives approaches its end. A Caretaker Committee cannot remedy this situation, and cannot validly act in place of elected officers.

Furthermore, I think if we deviate from the constitutional provisions, we might be endangering the fortunes of our party. If the tenure of our party executives can be legally faulted, then it means that any nominations and primary elections that they may conduct, can also be faulted.

This is not to talk of divisions that would arise, and is already arising within the party, when some of our members feel that they are being denied the right to aspire to executive positions, or that internal democracy is not at play within the party.

I am therefore of the firm view that it is better to follow strictly the dictates of our party and national constitutions, rather than put APC and its activities at grave risk.

Fortunately, we have already approved a timetable for the holding of congresses and elections. I think these should be allowed to go forward and all efforts should now be geared towards making them a great success.

​Once again, I welcome you all to this meeting with the hope that we will promote, always, the highest interest of the party and of our people.