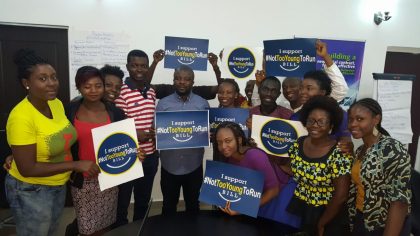 Leader of the group, Mr Samson Itodo, told State House correspondents after visiting Osinbajo on Thursday in Abuja that the movement was awaiting President Muhammadu Buhari’s accent to the Not-Too-Young-To-Run Bill, the last stage of its demand.

“We were here few weeks ago when we matched to the villa to deposit our letter of demand calling on the executive, the Buhari-led administration, to answer to call of history by accenting to the Not-Too-Young-To-Run Bill.

“We just came here to place that demand on the need to accent to the bill once it is transmitted by the National Assembly to the Executive.’’

According to Itodo, the young people have been at the forefront of the country’s administration since the country’s independence.

“It you look through our history, the independence that we enjoy, even the development of political parties and the democracy that we enjoy today was fought for by young people.

“Young people have demonstrated excellent leadership in different aspects of our national endeavour.

“What Not-Too-Young-To-Run seems to do is to open up that space so they can demonstrate excellent public leadership,’’ he stated.

Another member of the group, Mr Chibuzo Okereke, stated that the movement was prepared to sponsor Nigerian youths in many of the elective positions during the 2019 general elections once the bill became law.

“Once the bill is accented to, then the political process will start; I know a whole lot of youths are gearing up and they are getting ready; they are just waiting for the accent,’’ he said.

Mr Tony Nwolu, representing Oshodi/Isolo II Constituency in the Lagos State House of Assembly, said he sponsored the bill in order to close the gap in getting young people involved in mainstream politics.

According to him, the country currently lacks that participation and much has been said about it as being unjust.

“I believe that if you can vote, you should also be voted for; so far, we have come to the very last stage of that process and we are grateful to God.

“Today we have come to meet the Vice President who has, away from pointing out some other areas, assured us of support and we look forward to the President’s accent to the bill,’’ he stated.

The lawmaker said that the impact of young people was already being seen across the globe and that it would not be different in Nigeria.

According to him, within our country we have seen a whole lot of our young people do amazing things in different endeavours.

“When given the opportunity, you never really can under-estimate what very creative young mind can do.

“We will not deny the fact that most responsibilities that have been given to young people, they have always performed excellently,’’ he said. (NAN)