The voting exercise in the governorship primary of the All Progressives Congress(APC) in Ekiti was disrupted on Saturday by some protesters at the Oluyemi Kayode Stadium, Ado-Ekiti, venue of the exercise. 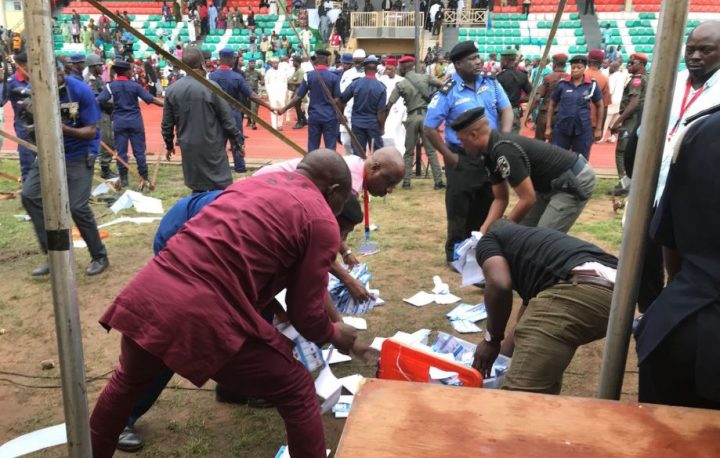 The News Agency of Nigeria (NAN) reports that the protesters had alleged that attempts were being made by some party officials to compromise the process.

The protest, which turned violent, led to party officials, aspirants and their followers as well as journalists to run for safety as gunshots were heard in and around the stadium.

The Director General of thehat the election was being compromised. Babafemi Ojudu Campaign Organisation, Chief Ranti Adebisi, also confirmed that there were suspicions t

It was not immediately clear if the primary election would still go on as security agents were sighted trying to restore order at the stadium.

Gov. Tanko Almakura of Nasarawa, who is leading the team conducting the primary election, had earlier told NAN that the initial downpour would not stop the exercise.

He had stressed the readiness of his team to provide a level playing ground for all the 33 aspirants participating in the primary.

Almakura, however, enjoined the aspirants to maintain decorum throughout the period, saying nothing was too much to sacrifice in the interest of the party.

Opeyemi Bamidele, a former federal lawmaker and aspirant, also told NAN that he was satisfied with the tight security arrangement put in place for the primary.

He also pledged his readiness to abide by the outcome of the exercise.

As at the time of filing this report, voting which started at about 4:30 pm, has been suspended till further notice.(NAN)