Ekiti APC Primary: ‘I have no anointed candidate – Tinubu

As aspirants slugged it out for the All Progressives Congress (APC) governorship ticket in the party’s primary election in Ekiti on Saturday, APC National Leader, Sen. Bola Tinubu said in Lagos that he had no anointed candidate.

Tinubu spoke with newsmen in Ikeja as the APC held its ward congresses in Lagos. 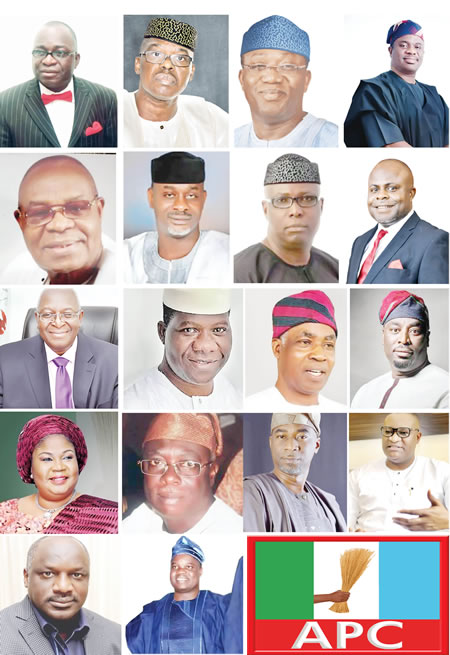 The winner of Saturday’s primary election will fly the party’s flag in the July 14 Ekiti governorship election, in which the APC is seeking to oust the Peoples Democratic Party in the state.

”I believe those in charge of the primary in Ekiti will do the right thing. I have put my own political gear in neutral.

”I have no anointed candidate. Everyone there aspiring and contesting are very dear members and they deserve the right to participate.

”About 33 of them in all, and we only need one seat for governorship. We have had leadership discussions. I like the fact that they showed up respectfully and committed to the peace and stability of the party in that State,” Tinubu told newsmen.

He said that feelers from Ekiti showed that things had been going on smoothly.

“We have responsible leadership around there.

”Sincerely, I had wanted to be in Ekiti but when you have this situation where Congress is holding the same time their primary is holding, charity begins at home; I must stay in Lagos to ensure that I help them.

” There are capable leaders over there that will see to the smooth exercise of the primaries in Ekiti, ” Tinubu said.

Speaking on the ward congresses in Lagos, Tinubu urged party members to conduct themselves peacefully to help the country grow and progress democratically.

He also urged them report any complaint at the party headquarters, rather than take laws into their hands.

”Until the various officials conducting the congresses write their reports, my own decision is to continue to appeal to the party to conduct themselves peacefully and comply with the rule of law.

”If they have any complaints, they should write to the party headquarters and just don’t take laws into their hands.

”I am proud of what is happening. I am very proud of the leadership. The leaders are for everybody; no biases, and they should move on peacefully and help the country to grow and progress democratically,” he said.

“I am very happy and proud of our party, All Progressives Congress, the APC. We are demonstrating to the people across the country that we are a law abiding political party.

”We believe in the tenets of democracy and that we demonstrate the openness in the congresses across the country, particularly.

”I can speak emphatically about Lagos that things are going according to plan, very open and transparent. People queued up behind whoever they want, no pre-ordained candidate. The turn-out is very impressive.

”The membership of the party is growing in leaps and bounds and open to all democrats who want to be identified with us.

”This is one of the best ways to energise the party that is almost remaining dormant at grassroots level and you could see the sense of belonging and the activities of ordinary people. It is a great joy for me,” he said.

Meanwhile, speaking to the News Agency of Nigeria (NAN), Chief Henry Ajomale, the Chairman of APC-Lagos, expressed satisfaction over the ongoing exercise.

He urged the incoming Chairman to ensure adequate welfare for members and amicable conflict resolution in the party.

He said the way party members conducted themselves ensured that the exercise was free of rancour in all the five wards in the area.

Yusuf expressed satisfaction with the exercise, saying the peaceful conduct was proof that party members were united.

‘We are happy with the way the congresses went across the five wards in the area.

“No case of violence, no case of misconduct everything went on peacefully.

“I thank our party members for the way they have conducted themselves which ensured that we had peaceful congresses.

“This is what democracy should be about at the grassroots, I am happy that Ayobo /Ipaja has delivered “,he said.

Yusuf said ward executive members were elected in all the wards without protests or oppositions.

He also the thanked the ward Congress committee for a job well done, saying the transparent manner in which they coordinated the congresses was commendable.

He expressed the optimism that justice the way the congresses in the area were successful the local government congress scheduled for May 12 would also be a success.

Also speaking, the Councilor for Ward D in the area, Mr Olusola Dada thanked party members for choosing leaders at the ward without rancour.

He said members had demonstrated that do-or-die politics was an aberration with the successful conduct of the congresses.

Dada said he was satisfied with the conduct at ward D and expressed the hope that the success would be replicated at the council congress.

“I am more than elated at tbe peaceful conduct in this ward. It shows there is no division and everybody is working together for the success of the area.

“We are happy. We can only say things will be the same at the council congress”,he said.

However, the ward election in some centres under Kosofe LGA in Lagos had some hitches due to disagreements between two groups of APC members.

At a centre located at No 18, Emmanuel High Street, Ojota, some members refused to allow the exercise to go on, saying their group’s list was not reflected in the one with officials at the centre.

NAN reports that when the atmosphere was becoming tense, the police and DSS had to escort the electoral officers and their voting materials to Kosofe council secretariat along Ogudu Road.

One of the party members from Ward F, Ojota, Engr. Kunle Afareogun told NAN that they resisted an attempt to impose one group on the people, contrary to the directive of the APC leadership.

When NAN visited Kosofe council, the gate was manned by some men who refused to allow anyone to enter, including journalists.

NAN reports that similar incident happened at Ogudu Primary school, Ogudu Road, where the DPO Ogudu, Mr Gbenga Olorunfemi, evacuated the electoral officials and materials and brought them in his patrol van to the council secretariat amidst heavily armed policemen.

NAN observed that men of the Federal Special Anti-robbery Squad from Ikeja were also at hand to check any violence.(NAN)