The governorship primary of the  All Progressives Congress (APC)  in Ekiti State has been postponed indefinitely following the violence which trailed the exercise on Saturday at the Oluyemi Kayode Stadium in Ado-Ekiti. 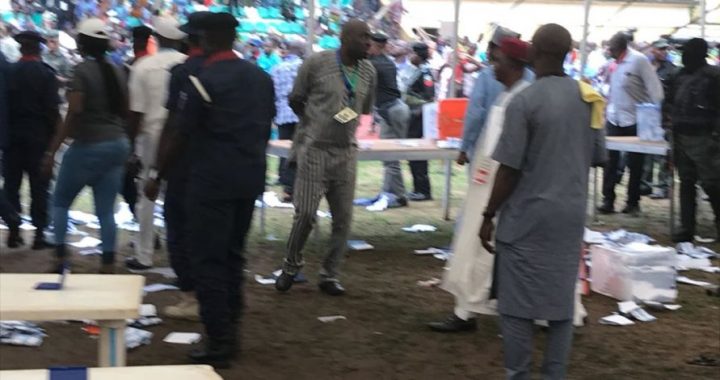 Oluyemi Kayode Stadium Ado-Ekiti, venue of the APC governorship primaries after the protest by some delegates

The leader of the APC team conducting the exercise and Nasarawa governor, Alhaji Tanko  Al-Makura,  hurriedly entered his vehicle and left the venue after  an emergency meeting with all the  33 aspirants on the way forward failed to yield result.

Though Al-Makura did not formally brief newsmen on the agreement reached with the aspirants, NAN learnt that  the need to extract commitment  from them  for a peaceful conduct in a rescheduled exercise  dominated the  discussions.

Confirming the postponement, two of the aspirants, Mr Bimbo Daramola and former Speaker, Mr Femi Bamisile, said it was a unanimous verdict at the meeting that the process should be suspended indefinitely.

“There was an issue somewhere about the exercise and they raised observation about  sharp practices that had compromised the process which led to protest and the feeling was that the process should be suspended to avoid bloodshed,’’  Daramola  said.

NAN reports that only delegates from four  local governments had concluded  their voting   when violence erupted .

Trouble started at about 5.30 pm when some agents raised observations about how the process was being allegedly compromised , accusing  some security agents of  dictating to delegates who they should vote for.

The resultant violence led to shots being fired  sporadically into the air by security agents  when the situation was deteriorating, resulting in many scampering for safety.

It was learnt that all efforts made by members of the  Al-Makura committee that supervised the  primary to restore order failed.

The Director General of  Babafemi Ojudu Campaign Organisation, Chief Ranti Adebisi, and some  agents had complained  that the process had  been  compromised.  (NAN)