The Presidency has frowned at the letter written by the National Chairman of the People’s Democratic Party (PDP) Mr. Uche Secondus to the United Secretary-General accusing President Muhammadu Buhari of several allegations. 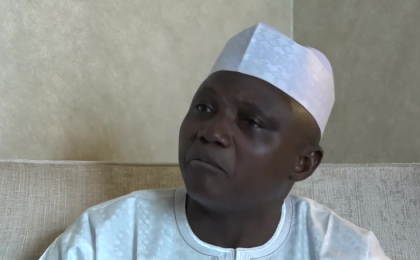 Malam Garba Shehu, the Senior Special Assistant to the President on Media and Publicity, in a statement in Abuja on Monday, said the letter had confirmed the opposition party as a bad loser.

According to him, the letter which is no less preposterous and comical has shown the opposition accusing the Nigerian government of “destroying Nigeria’s democracy.’’

He said the letter was a clear indication that the PDP was desperate for another chance after it was kicked out for failing the nation and its people.

He said: “PDP’s lecture on democracy and the rule of law coming from a party with a tradition of the undemocratic rule is a desperate attempt to pervert history and the course of justice.

“The sermon, is both trite and hollow, coming from a party with intolerance for dissent as its hallmark.

“A party that humiliated opposition parties and stunted their growth. This was the atmosphere that nurtured the birth of the All Progressives Congress (APC).’’

The presidential media aide also debunked the insinuation that the ongoing war against corruption was an attack on human rights.

He said: “The war against corruption, for which many more politicians may soon be docked, cannot be misrepresented as an attack on human rights and Mr. Secondus should not try to mislead the UN.

“Nigerian politicians at all levels have been used to dispensing with state funds in whatever manner they please, and to have someone, an administration, finally saying, “No. It doesn’t matter how big or important you think you are; the law must come against you…”

“That is not something they are used to at all. For the PDP, as has now emerged, national security was the major source of their funding.

“The PDP Chairman and all other politicians against whom the country’s anti-corruption agencies have on-going investigations should be assured that it is only a matter of time before the law catches up with them, and makes them pay for the grief their mismanagement of the past has caused and is still causing Nigerians.’’

According to him, Nigerians suffered because of the poison sowed by the PDP.

He stated that if the public were privy to some of the facts and figures on corruption that “President Buhari and the anti-corruption agencies are dealing with, they would understand the passion that drives the determination to nail these callous men and stop them in their corrupt tracks.’’

On the accusation that President Buhari is behind the spate of herdsmen and farmer clashes in the Middle Belt of Nigeria, Shehu described the accusation as an allegation from the beer parlor.

He maintained that the PDP certainly had no shred of evidence to make such an allegation.

“These are comments driven by tribalism and that age-old trick of balkanization in a bid to score political points.

“This should not surprise anyone given the politics of anger, violence, and polarisation that are the stock-in-trade of the PDP,’’ he added.

Shehu narrated the various lengths to which President Buhari had gone to end the spate of killings in the troubled areas across the country.

He said such measures included mobilizing state resources against the attackers, approving the setting up of new police and army formations in the affected areas, and the recruitment of thousands into the police and other arms of the military.

According to him, a more reasonable opposition should always acknowledge these efforts.

“What can President Buhari possibly gain from the killings? There is no intelligent angle from which you analyze the matter and see any possible gain for this government in the wanton destruction of life and property going on.

“For the “new” PDP leadership on the other hand, incapable of thinking big about the nation, they see and treat the unfortunate spate of killing of innocent Nigerians as a political gift, about which they seem very happy to cite as the basis for a return to power.

“They feel bad at every turn the country improves, which is beyond comprehension. They should bury their heads in shame,” he said.(NAN)