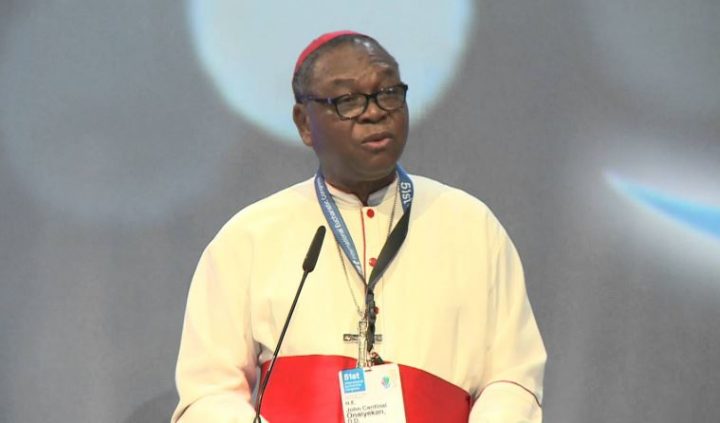 The Catholic Arch Bishop of Abuja Diocese, John Cardinal Onaiyekan, has called on politicians and the electorate to ensure crisis-free general elections in 2019

He maintained that it was the duty of the present administration to ensure that the 2019 general elections are peaceful.

According to him, the election should be seen as a democratic process where the electorate is allowed to cast his/her votes peacefully.

“Elections in 2019 should not become crisis moment where villages, roads, and all towns are flooded with the police, army and armed vehicle and turning the country into a war zone.

“In civilised countries, on the day of elections, you won’t even know that elections are going on because people cast their votes and go away, because the process is transparent and open.

“But in Nigeria, elections have become war. Why should it be so?

“The electoral body in Nigeria should organise elections with sincerity of purpose and give ordinary people the freedom to cast their votes.

“Our votes should be properly counted and announced transparently,” he said.

He commended Ndoma-Egba for building a befitting church for parishioners in his community.

Speaking, Ndoma-Egba said that he built the church after making a vow to God while he was 11 years of age.

“When I was 11 years, I made a vow to God that if he made me a man in life, I would build a befitting place of worship for him.

“I started this project in 2003 and along the line, I ran short of money; but my wife stood by me and today, this church is a blessing and testimony.

“At 11years of age, I made a pact with God.  I am very happy that I have fulfilled my side of the bargain today.

“I and my wife did not build this church because we have too much, we did it because we made a vow to God,” he said.

The NDDC Chairman urged youths in the state to shun cultism, violence and other social vices capable of truncating their lives.

The state governor, Mr. Ben Ayade, who was represented by Rev. Fr. Bob Etta, his Special Adviser on Religious Matters, said that the church will promote spiritual well-being in the area.