Traders in Ebonyi who obverse the sit-at-home order by the Indigenous Peoples of Biafra (IPOB) on May 30 will permanently forfeit their shops, Gov. David Umahi said on Tuesday. 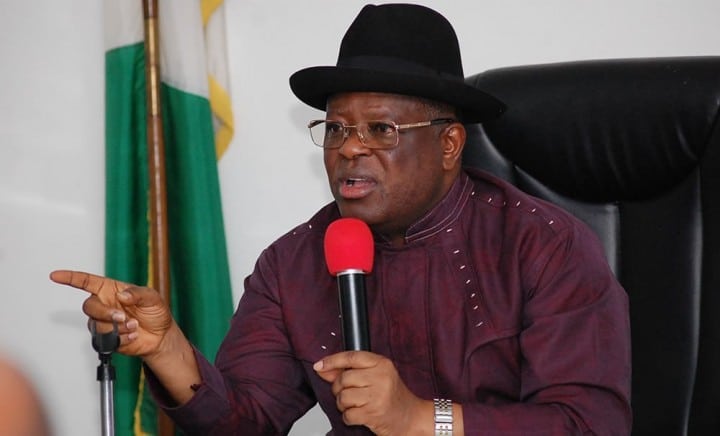 Umahi, who made the declaration in Abakaliki while addressing the people at the 2018 democracy day celebration, noted that such order would not be observed in the state.

He said that the state was terribly marginalised during its days in the old Anamabra, Enugu and Abia and was now making efforts to “find its feet”.

“We do not need distractions or second colonisation as we continue to believe in God to change our narrative with no man born of a woman setting us back.

“Any trader that closes shop on the day will forfeit it forever and any protest will be decisively dealt with.

“Ebonyi indigenes should go about their businesses peacefully and safely and if the South-East governors say we don’t want IPOB activities, it does not mean that we are happy with the zone’s marginalisation in the country,” he said.

The governor noted that the manner in which IPOB was pursuing its course was not right as the Ohaneze Ndigbo took the right action in the comity of Ibo sons and daughters.

“We call on the Federal Government to look into the plight of south-east and address the issue of marginalisation because we believe in one Nigeria that will enshrine justice and fairness.

“We also believe in the sanctity of human lives and call on the citizens to cooperate in ensuring the growth and development of the state and country,” he said.

He commended the organisers of the event and the chairmen of the 13 local government areas of the state for its success, noting that mobilisation of citizens was awesome.

“It also demonstrates your belief and commitment to our government that is of divine mandate and it is further a show of force to declare loudly that there is no vacancy till 2023,” he said.

Umahi used the occasion to reel out his government’s achievements in education, health, agriculture, infrastructure development, commerce and industry and human empowerment among other sectors.

Sen. Pius Anyim, a former Senate President and the event’s Chairman, congratulated Ebonyi people and Nigerians on the occasion, noting the state had a unique way of celebrating the democracy day.

“The government organised a thanksgiving service and praise night to thank God for his mercies, hosted elders and traditional rulers of the state, among other events that portray our oneness.

“I am proud to be a citizen of Ebonyi and also proud to be associated with the Umahi-led administration which will surpass its present strides in its second tenure,” he said.

The News Agency of Nigeria (NAN) reports that stakeholders from various segments of the state gave their goodwill messages while a march-past from the various locl governments and development centres was also held. (NAN)