Race for APC national chairmanship position open to all – Ajimobi

Gov. Abiola Ajimobi of Oyo State on Thursday said the race for the All Progressives Congress (APC) national chairmanship position was open to all. 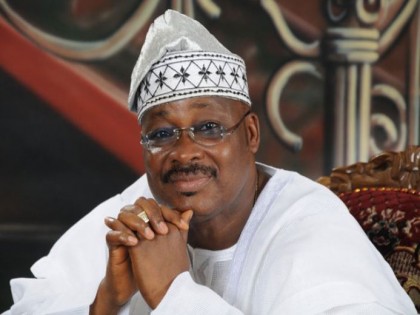 He said that President Muhammadu Buhari´s endorsement of former Edo Governor, Adams Oshiomhole for the position did not foreclose the contest.

“The President has endorsed Oshiomhole, but it does not preclude other people from declaring to contest.

It is a democracy and everybody is open to declare.

“I think everybody has a right to declare and once they declare, we go through the convention and we choose whoever wins,´´ he said.

Ajimobi, however, added that the Asiwaju Bola Tinubu´s reconciliation committee had not relented in reconciling aggrieved members of the party, stressing that it was working underground.

According to him, the party should first realize that reconciliation is all-encompassing and the Asiwaju’s committee is working quietly, reconciling people underground and working with everyone; the reconciliation is ongoing.

´´As human beings, from the beginning of our being in this world till the end, we must continue to reconcile. We must reconcile ourselves with the environment and with people.

´´I believe the Asiwaju team is working very effectively and reporting to the President,´´ he said.

He said that the crises that followed the party´s just-concluded congresses in most states of the federation were nothing new.

He stressed that crisis would arise because people always valued something that was very good and of good value.

He added that the crisis showed the level of democratization that the country had attained and also the level of interest the people had in the party.

Ajimobi explained that the date for the APC National Convention was changed from June 2 to June 23 because of the Ramadan fasting period.

“If it were to be during the lent, we will do the same thing because our party is made up of Christians and Moslems,´´ he said.

He expressed optimism that aggrieved members of the party who had cases in the court would withdraw them before the convention because it had an internal mechanism to address such cases.