The All Progressives Congress (APC) in Ekiti on Saturday said it had suspended its gubernatorial campaign earlier scheduled to take off on Monday. 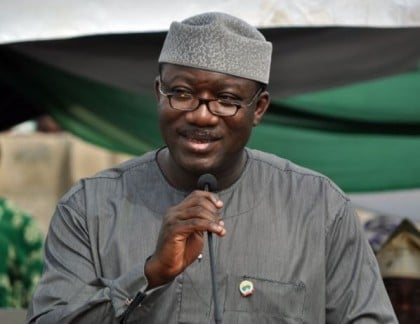 The suspension came as the police command in the state released the report of Friday’s shooting incident at the APC rally organized to welcome back to the state its flagbearer in the July 14 governorship election, Dr. Kayode Fayemi.

The News Agency of Nigeria (NAN) reports that Chairman of the party in the state, Chief Jide Awe, told newsmen in Ado Ekiti that the postponement was due to the shooting incident.

According to Awe, the suspension will remain in place until the police can guarantee the safety of its gubernatorial candidate and other members of the party.

He insisted that Friday’s shooting was an attempt to take the life of Fayemi, with the bullet, however, hitting a former member of the House of Representatives, Mr. Opeyemi Bamidele.

Awe demanded a thorough investigation of the matter by the police while the outcome of the report must be made public.

But the police command in its situation report released on Saturday by its Public Relations Officer, DSP Caleb Chukwuemeka, said findings revealed that what happened was a case of accidental discharge on the part of a mobile police officer.

” On Friday, 1st June 2018, at about 1700 hours, the policeman accidentally shot Opeyemi Bamidele and one other, but he has been arrested.

” He is attached to 20 PMF, Ikeja, Lagos State, where he was posted on bank guard duties somewhere in Ikeja. The policeman came on illegal duty to Ekiti State.

” A politician, who conspired and removed the said policeman from where he was posted by his Squadron Commander and came to Ado-Ekiti with him for an unofficial reason has also been arrested.