Adams Oshiomhole to Ministers: Swear in Board Members or Get Expelled 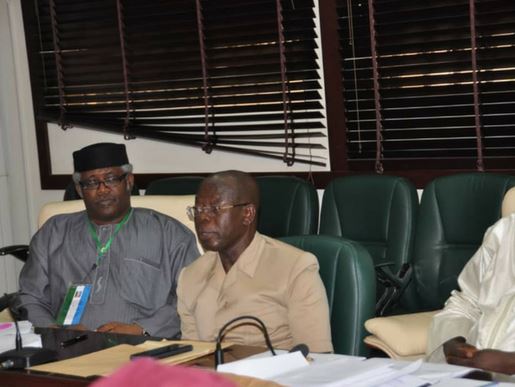 The National Chairman of the All Progressives Congress (APC), Comrade Adams Oshiohmole, says Ministers who fail to inaugurate members of the board of parastatals under their supervision risk expulsion from the party.

Some ministers including Ministers of State Aviation and that of Labour and Employment, Hadi Sirika and Chris Ngige respectively, had refused to inaugurate members of boards recently appointed by President Muhammadu Buhari.

Ngige, had in a letter addressed to the APC National Chairman, explained that his inability to inaugurate the board of the Nigeria Social Insurance Trust Funds (NSITF), was due to alleged uncovered fraud by the previous board to the tune of N40billion.

Sirika, on the other hand, said he could not swear in board members because of the appointment of non-professionals which according to him, is against the Act governing the aviation industry.

“If the minister refuses we will suspend him from the party. You know we must return to internal discipline.

“For me, it is the height of mischief for any minister, you cannot purport to be honourable minister and you act dishonourably and nobody is greater than the party.

“And we will expel the minister.

“We will prevail on the president that he can’t keep in his cabinet, people who have neither respect for his own decisions nor have respect for the party without which they would not have been ministers.

“There is no independent candidate in our system, nobody, I emphasis no minister is above the party.’’

Oshiohmole said members of the board of government agencies and institutions appointed by the president must be inaugurated, noting that some ministers had taken undue advantage of the president’s fatherly disposition.

He said: “Now, it is the same green pen that made them ministers that appointed these board members that they are refusing to swear in.

“And it is absolutely illegal for a minister in a democracy to prey the powers of the board because the laws establishing those institutions are clear, that the boards have procedures to follow.

“So, when a minister sits in his office to appropriate the powers of the board in a democracy, not in a dictatorship and award contract that didn’t go through boards, those are clearly abuse of office for which they are liable.

“I am convinced that what they are doing is not with the endorsement of Mr. President.

“Over the period, they have tried to drop the president’s name but I tell them it is the same authority that appoints these people.

The APC leader also dismissed the insinuation that he had been destabilised over the threat of mass defection from the party.

“No, I am not losing sleep. I am sleeping very well. I still hold the view that you can’t vomit in the morning and convert it to lunch in the afternoon if you have honour. And that position still remains the same.

“I have made this point clear that we can distinguish the mercenaries from those who genuinely have complains.

“Our business as party leaders is to try and manage, listen and find solutions to those who have verifiable complains.

“But those who are permanent mercenaries and are in this business for personal issues, there is not much we can do about that and we are not going to change the core values of the party in order to retain them,’’ he said.