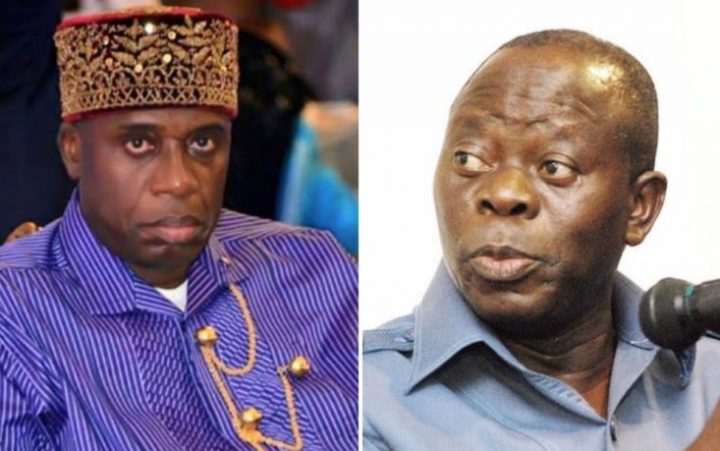 The President Muhammadu Buhari Campaign Organisation has described as fake news speculations that its Director-General, Mr. Rotimi Amechi, disparaged the APC National Chairman, Mr. Adams Oshiomhole.
Mr. Festus Keyamo (SAN), the Director, Strategic Communications of the organisation, said this in a statement issued to the New Agency of Nigeria (NAN) on Thursday in Lagos.
“Our attention has been drawn to a news item purporting that the Director-General of President Muhammadu Buhari Campaign Organisation, His Excellency, Rt. Honourable Rotimi Amaechi, disparaged the Chairman of our great party, the APC, His Excellency, Comrade Adams Oshiomhole, to the effect that he is “bad luck” to the Party.
“This news item is a classic case of the much-touted `fake news’ that has become a tool in the hands of desperate politicians. It is also an unsuccessful attempt to create a division between both great leaders of the Party.
“For the avoidance of doubt, we wish to state without equivocation that Rt. Honourable Rotimi Amaechi did not at any forum, whether in private or public, utter such words or anything close to those words in reference to Comrade Adams Oshiomhole. He holds Comrade Adams Oshiomhole in the highest esteem possible.
“We have since discovered that this `fake news’ was concocted, released and circulated by the sinking main opposition party. Indeed the combination of Rt. Honourable Rotimi Amaechi and Comrade Adams Oshiomhole is an obvious nightmare to them.
“From our intelligence sources, we wish to alert the general public that as the campaigns draw closer, many of such fake news would be released and circulated by the opposition that is presently clutching at straws and harvesting chaff to survive.
“For them, blackmail, outright lies, falsehood and now fake news have become their campaign strategy.
“For us, we shall continue to alert the general public anytime such fake news is released and urge them to continue to ignore such stories.
“However, on our part, we are set to run an issue-based campaign,” Keyamo said.