Osun 2018: We are not deterred by defections from APC — Aregbesola

Gov. Rauf Aregbesola of Osun says he and members of All Progressives Congress (APC) in the state are not deterred by the defections of some party members to opposition parties. 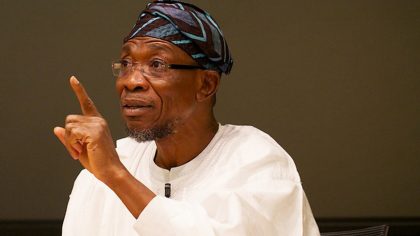 Aregbesola made the remark at a rally organised by the Speaker, State House of Aseembly, Mr Najeem Salaam, in Ejigbo, Mr Sola Fasure, the media aide to the governor, said in a statement on Sunday.

The News Agency of Nigeria (NAN) recalls that some APC members in the state had defected to opposition parties in the past few weeks ahead of the Sept. 22 governorship election in the state.

However, the governor said the party remained strong on account of its wide acceptance by the people of the state, adding that the defections would not in any way affect the party’s victory in the forthcoming election.

He said that members of the party were committed and united, regardless of gale of defections from the party.

“We have known friends, enemies and cunning individuals among us by this defection but we are not afraid of their antics as we remain united, strong and committed.

“We are confident of victory. We know God is on our side and we believe in Him; we believe He will lead us to victory”.

Aregbesola said his party was working hard to sustain the tempo of continuity, which according to him, can only set the state on the pedestal of all round development.

He said that APC is the only political party that can turn around the socioeconomic fortunes of the state and Nigeria for the better and urged the electorate to vote for the party in all elections.

He commended Salaam, who was one of the 17 aspirants that contested the APC governorship primary which Alhaji Gboyega Oyetola won, for always abiding by the party’s decision.

He described Salaam as a pillar of support to APC in the state and beyond, noting that his position had been diligently used to effect positivity in the party and for its loyalists.